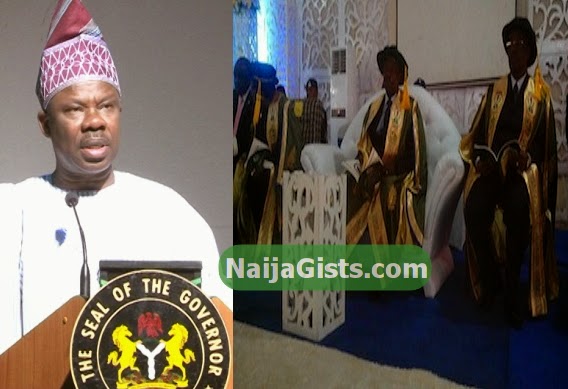 The governor of Ogun State has handed 15 First Class graduates of Tai Solarin University of Education an automatic employment.

While speaking during the combined convocation ceremony of the institution, the governor offered automatic employment to the 2012/2013 Best Overall Graduating Student, Mr. Adeniji Kayode and 14 others who excelled with first class honours.

“It gladdens my heart to note that you have relentlessly worked hard to sustain yourself in the midst of great number of higher institutions in Ogun state. TASUED has proven it is a great citadel of learning where academic excellence and good moral training are impacted on the students.

“It is gratifying to note that in less than 10 years of being a full-fledged university, Tai Solarin University of Education has become one of Nigeria’s best universities, consistently among universities at the top of the Nigerian university League. Also, it has continued to be a pacesetter and trailblazer in the provision of qualified teaching corps.

“This institution has not disappointed in its mandate of producing successful graduates that have carved a niche for themselves in their different endeavours and continued to contribute their quota to the socio-economic development of our great nation,” Amosun said.