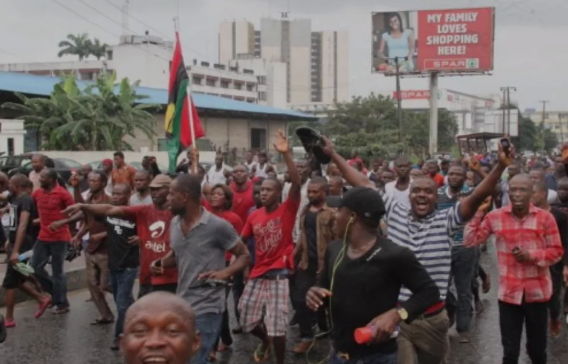 May 16, 2016 – 2 MASSOB Members Killed By Policemen In Onitsha Anambra State

2 members of the Movement for the Actualization of the Sovereign state of Biafra, MASSOB, died yesterday in a series of violence that rocked Onitsha Anambra state.

According to eyewitnesses, one of the victims died while putting up a fight with the police while another was beaten to death by a rival group on Edeh Road.

Vanguard reports that the first victim was said to have called his members numbering about 20 on phones and on arrival at the scene on Udeaja/Ibe Street, they reportedly attacked the policemen, who gripped the suspect.

The policemen in self-defence used the suspect as shield while the attack was on and in the process a team of policemen arrived on a tip-off, which made the members to run away, while the suspect was arrested.

Once at the Police station, the deceased was said to have complained of severe pains as a result of the attack on the policemen that used him as a shield during the assault from MASSOB members.

The second MASSOB member died during a fight with a rival group member on Edeh road in Onitsha.

However the group claimed the two deceased were killed by the police.