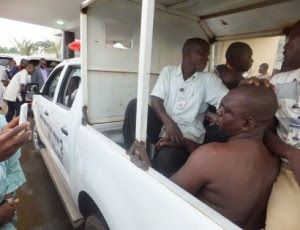 The two students – Godwin Ekpo (20) and Francis Jonah (19) – conspired and stabbed to death Boniface Odinaka who was the labour prefect of Army Day Secondary School.

Police Commissioner in the state, Kola Shodipo said the two students,said to be cultists have confessed to the crime and would be charged to court soon.

He said the command also arrested 20-year-old Gentle Moses at Bogobiri area of Calabar for negotiating to sell a 15-yearold Richard Lawrence from Akwa Ibom for N1.5 million.

Moses, who was arrested in Bogobiri area of Calabar, told newsmen that the devil pushed him to try to sell his friend for money.

“It was the devil that pushed me. I actually did not know what happened to me,’’ he said.

Shodipo also said the command has arrested an armed robbery syndicate that operates between northern Nigeria’s Taraba state and Ikang in Bakassi Local Government Area of the state.

Briefing newsmen in Calabar on the security situation, the Commissioner of Police in the state, Mr Kola Shodipo, said the gang was into illegal arms dealings and car theft.

The commissioner said all the suspects are from Taraba.

Shodipo said that on July 14, the command arrested two robbery suspects who specialised in robbing supermarkets and pharmaceutical shops in parts of Calabar Metropolis.

He gave the names of the suspects as Hopeman Etim (22) and Edem Effiong (21).

Shodipo said one locally-made pistol and two cartridges were recovered from them, adding that one Highlander Jeep with registration No. EKY 158 BH was recovered from a doctor in Abi Local Government Area’s place.

One of the gun runners, Lawal Bako from Taraba, told newsmen that they sell their arms to Boko Haram members and other inter-tribal warlords in the north.