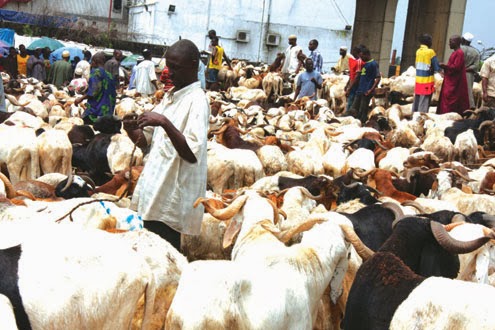 Officials of the the Lagos State Environment and Special Offences Enforcement Unit have confiscated dozens of rams on display for sale in a prohibited area of the state.

The task force from the governor’s office had chased the ram sellers who converged at Ijora-Olopa area and carted their rams to an unknown detention centre.

The ram sellers, with seven days left to the Eid-el-Kabir festival, have appealed to Gov. Babatunde Fashola to release the rams.

They made the appeal on Monday in an interview with the News Agency of Nigeria (NAN) in Lagos.

Mr Muhammed Mudi, leader of the ram sellers, expressed shock over the development, saying that the situation was embarrassing.

Mudi said that they were not expecting the officials since they had had approached an official of the Ministry of Agriculture who gave them permission to sell rams at the location.

“An official from Agriculture Ministry gave us permission to use this place, but I was surprised when I heard that he had been arrested.

“These ram sellers came from Sokoto State and they are not aware of the relocation order.

“That is why we are appealing to the governor to allow us to make our sales here this year; we promise not to bring our rams here next year, “ he said.

Mudi said that the task force came to the market and carted away their rams in trucks.

Sulaiman Saliu, one of the ram sellers, said that bringing the rams to Lagos was expensive and urged the government to allow them to sell their rams.

“We spent a lot of money to buy these rams and use N3, 000 each to transport them to Lagos without the other various charges from different local governments.

“We plead with the government to tolerate us this year, “ Saliu said.

He said that the dislocation would have effect on the price of the rams.

“If we are sent away from this point, it will result in additional charges on the ram because we will still pay for transporting them to a new place. In fact, it is going to be a great loss on our own part and that is why we are appealing to the government not to take our rams away from here, “ he said.

Reacting, Mr Olaide Agboola, Chief Superintendent of Police (CSP), who led the team, said that the State Ministry of Agriculture had designated some locations for sale of rams in the state.

Agboola said that he had sent some officers to Ijora on Sunday who gave the ram sellers 24-hour deadline to vacate the place.

“We have told them that Lagos State Government will not tolerate littering the state with wastes; they should go and sell their rams in designated areas.

“I will make sure that not a single ram remains in this place today. This will serve as a lesson to other traders, “ he said.