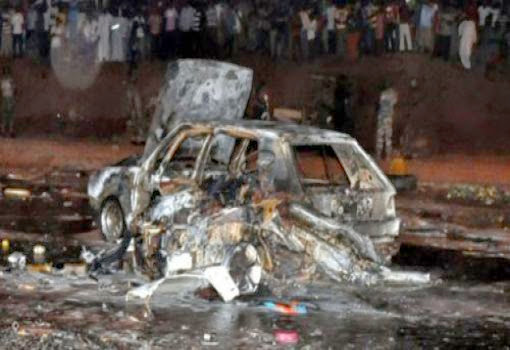 2 men who came from Cameroon have been arrested in connection with Thursday night’s suicide bombing that killed 19 people in Abuja.

The suspects who are currently in police custody reportedly parked a bomb-laden Volkswagen Golf car around Wazobia Park and walked away moments before the bomb exploded.

Abuja Police spokesperson, Mr Frank Mba made this known while chatting with journalists this afternoon.

Mba said 19 people died while 31 were left injured in the attack that happened around 8pm last night very close to a police checkpoint opposite Nyanya bus station.

This is the second suicide bombing that happened in the same place in less than a month.

“There were policemen around when this explosion happened and they didn’t manage to stop it,” lamented Charles Osueke, who was in the area at the time of the blast.

May the souls of the victims rest in peace (amen).