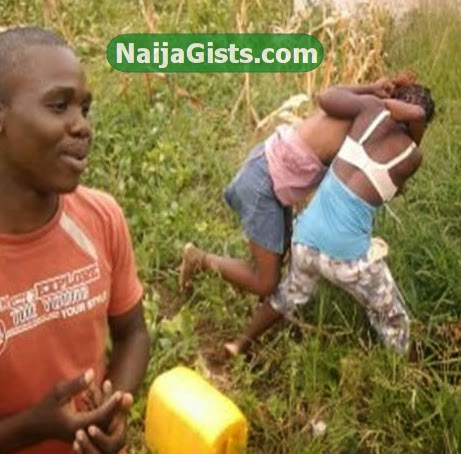 A double dater identified as Folarin Tayo has put his girlfriends into trouble after they got involved in a physical battle in a bid to have him to themselves.

The bible verse which states that in the last days, 7 women will cling to one man is gradually coming to pass.

37-year-old Joy Morkoha, 26-year-old Blessing Ugboh and 25-year-old Tina Osakwe are currently cooling down in prison after they were accussed of causing public disturbance for fighting over a man in public.

The trio were arrested at Shobowale Street in Ilasa area of Lagos state last week and charged with disturbing public peace.

The man that caused the fight reportedly dated the three secretly without any of them knowing.

This continued for sometime untill they got to know and could not bear it.

A quarrel broke out among them when they discovered and each of them wanted to have Tayo to themselves.

A suggestion by one of them that they should continue their secret relationship with Tayo was rebuffed by two other women who insisted on having him to themselves.

This resulted in a fight among the women. They injured one another during the fight before a police patrol team intervened and took them to Olosun division where the police attempted to settle the matter amicably. The effort of the police also yielded no positive result as each insisted to have Tayo.

Mrs F.O Abegunde granted them bail in the sum of N50,000 with one surety in like sum but none of the suspects could fulfill the bail condition.

They have been remanded in prison custody as the matter was adjourned till June 16th, 2014.