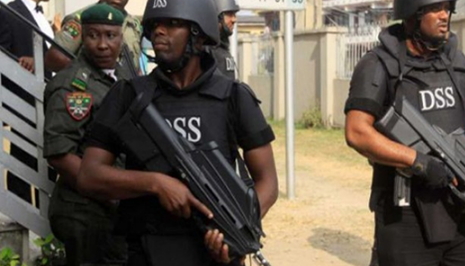 A angry mob on Wednesday blocked the Kaduna- Abuja Expressway after officials of the Department of State Services (DSS) accidentally killed a traveller at Jere town, about 100 kilometres to Kaduna. A witness told our correspondent that the stray bullet killed a woman inside a Kaduna-bound commercial vehicle which she boarded in Abuja with her five children.

“We only saw the DSS operatives, about six of them, arrive in two Hilux vans. Immediately they saw a vehicle coming, they tried to stop the driver but he refused to stop so they shot at him,“But unfortunately they missed their target and hit the commercial vehicle conveying the victim and her five children. She died on the spot. – a witness said

This angered motorists who witnessed the incident and they blocked the road.” It was learnt that it took the intervention of the state Police Commissioner, Alhaji Adamu Ibrahim, who appealed to the motorists before they removed the blockage.

Ibrahim confirmed the incident to journalists. He said the police had arrested the DSS officials who shot the woman.