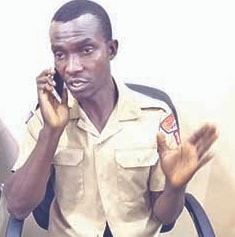 A Grade I Area Court, Karmo area of Abuja, today, ordered the remand of a 27-year-old Pastor, Emmanuel Ukaegbu, in prison arraigned for criminal breach of trust and cheating.

The judge, Inuwa Maiwada, gave the order after Ukaegbu of Abia State, pleaded guilty to a two-count charge leveled against him.

Maiwada adjourned the case until June 25, for sentencing.

The prosecutor, Ifeoma Ukagha, told the court that one pastor Samuel Oguche, on behalf of the general overseer of Omega Power Ministry Abuja, reported the matter at the Gwagwa Police Station Abuja, on June 2.

Ukagha said the complainant alleged that sometimes in February 2018, the church entrusted Ukaegbu with electronic and household equipment meant for the Church, which he diverted.

Ukagha said that Ukaegbu made away with tiger generator valued N15, 000, key board valued N70, 000, gas cylinder valued N6, 000 and a standing fan value yet unknown.

He said all effort made by the police to trace and recover the items proved abortive.

The prosecutor said the offences contravened the provisions of Sections 312 and 322 of the Penal Code.