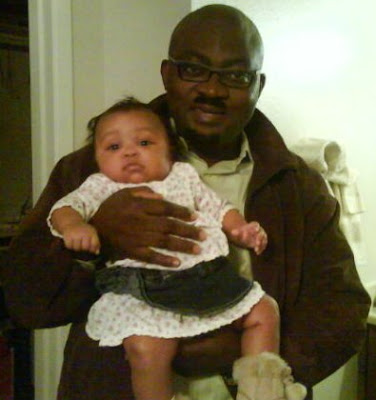 Mr Adams Unaji, the driving force behind Occupy Nigeria protest in 2012 is dead.

He passed away on Wednesday, the 3rd of July 2013 after an apparent heart attack.

Just like a normal day, he showed up at Vision FM radio station in Abuja on the aforementioned date waiting to go on a radio talk show.

All of a sudden, he complained of certain discomfort and asked for permission to visit the toilet. On returning, he suddenly collapsed.

He was immediately rushed to a private hospital in Abuja where died a short distance from the medical facility.

The popular activist was born on the 31st of August 1972 in Zaria to Patrick Abba Unaji and Teresa Oniwo Akpa Unaji.

He married a Texas-based woman named Valentina Ibirogba and the couple had a daughter named Abba Modupe Unaji.

He relocated to the United States Of America in 2004 to be with his wife where he worked for Chase Bank in Arlington Texas.

In 2012, he returned to Nigeria where he worked as Youth development Director at the Council for Nigerian National Interest until his death on Wednesday.

On Tuesday July 2nd, he shared the death story of Abuja-based Senator Pius by saying;

Senator Pius Ewerhido.May His soul RIP.In moments of shock and sadness like this one,we whom God by His mercy has spared us more days need to wake up to the transient and ephemeral nature of Power and Life.His death should inspire others to rededicate themselves to the pursuit of Justice,fairness and service. Adieu Distinguished.

His last tweet was on Tuesday, a day before his death;

“Dem go they juba Pope,juba Imam juba Bishop…Once again the Vatican is enmeshed in another crime.”

Late Adams Unaji is survived by his little girl and a wife.