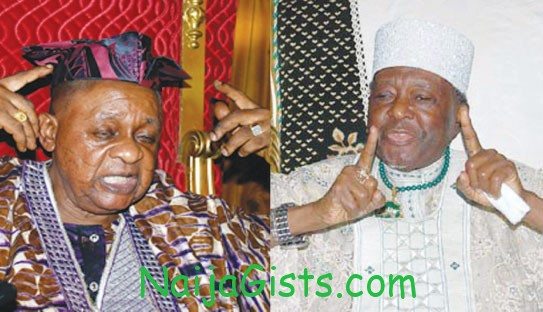 The frosty relationship between Ooni of Ife, Oba Okunade Sijuwade and the Alaafin of Oyo, Oba Lamidi Adeyemi III continued over the weekend, as Oba Adeyemi lashed out at Oba Sijuwade, describing him as one fond of distorting history and ignorant of the details of his ancestral roots. Oni had during the Centenary anniversary of late Chief Obafemi Awolowo held at the MUSON Centre in Lagos criticized Alaafin over the celebration of Oranyan.

He was said to have described Alaafin as not being connected to Oranyan, one of the sons of Oduduwa and so not qualified to celebrate him. Ooni was said to have stressed that Alaafin was reigning over a dead empire, saying that Alaafin was a rascally person and that “Alaafin is not Oranyan”, but he had kept his cool and went ahead with the Oranyan celebration, “which attracted many dignitaries from all walks of life in Nigeria and in the Diaspora”.

Oba Adeyemi while reacting at the weekend during the special birthday lecture organized in his honour by the ‘City People Magazine’, entitled: “Reviving Old Oyo Customs and Tradition”, delivered by a Portuguese national, Ms Paula Gomes (Alaafin’s Cultural Ambassador), the monarch said he had decided not to engage in altercations with Ooni any longer since former President, Chief Olusegun Obasanjo summoned him, the Awujale of Ijebu, the late Oba Oyebade Lipede and the Ooni to an all-night meeting, and everybody had agreed to cease fire.

He however said despite keeping his cool, Ooni had continued to castigate him and his traditional activities, adding that he had deemed it appropriate “to recall history, educate the Ooni and let the world know the truth.” Making reference to series of documentary evidence, Alaafin recalled that Oyo is superior to Ife in many ramifications, asking, “where did this Yoruba Language that we are speaking originate from?

Which language was used in writing the Bible? It is Oyo Language. Why not Ife language? Where else are they speaking Ife Language apart from Lagere Quarters? Why are the Modakeke people, who are living behind Ife not speaking Ife Language?”. Alaafin further said that he had confronted Ooni with various questions in the past, even before Chief Obasanjo at the meeting, but he could not answer them, “instead, he came with books that could fill three baskets”.

Alaafin said that, “In 2009, Ooni had rubbished the institution of Alaafin, but a year after when he was celebrating his birthday said Oranyan was his father’s ancestor. “How could you have denigrated your ancestors and later claim that you are a son of the Alaafin. Anybody who does not know his ancestral roots, who did not strive to learn about it, and does not learn from those who know, will continue to make mistakes and flounder in ignorance. That is part of Ooni’s inadequacies. “When we wanted to celebrate Sango, they said Sango is not Yoruba. Sango studied Quoran. He was the one that was first conferred with the title of ‘Akeugberu’. He was the first in the art of adjudicating justly.

When he was born, the umbilical cord that joined him with his mother could not be detached. Because they pulled it and it would not cut, it became the name ‘Afonja’. The glory, success and tradition of Yoruba started from Oyo”, the Alaafin emphasized. He added that Oyo state during the administration of late Chief Bola Ige (SAN) came up with a stamped paper recognizing Oranyan as the Head of the Princes and Princesses in Yorubaland, “and that Oyo dominated all other nations, namely: Ife, Ijebu, Egba, Ijesa, Sabe, Owu and so on”.

Oba Adeyemi equally said that when Messrs Richard Lander and McPherson visited Oyo-Ile in 1827, they concluded that what they saw in Oyo-Ile in terms of historical structures and rich cultural heritage was uncompared with what obtained in the old European world, while cautioning the Ooni against further distorting historical facts, which he said his (Sijuade) predecessor, Oba Adesoji Aderemi, did not do.

In his congratulatory address on the occasion, the Director, Institute of African Studies, University of Ibadan, Professor Isaac Albert, said that the university was ever proud to associate with the Alaafin, who turned 74 on October 15, “being our able and reputable patron that epitomizes the rich African cultural heritage and an inspiration to all of us.”

The battle of the monarchs…….