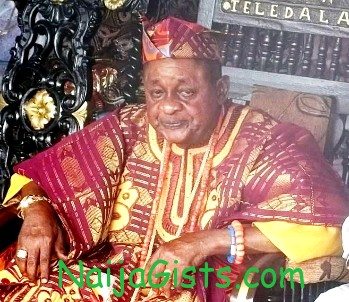 Oba Lamidi Adeyemi, ALAAFIN of Oyo, has described as desecration of the sacred traditional institution for the police to invite a monarch to their station to make a statement.

Instead, Oba Adeyemi noted the police should go to the palace of the monarch to make enquiries.

He was reacting to the invitation of Sabiganna of Iganna, Oba Soliu Oyemonla Azeez, by the police on the invasion of the farmlands of his subjects by some Fulani herdsmen.

Alaafin, who was speaking at the 3rd year coronation anniversary of Sabiganna of Iganna, said the action was ridiculous and insulting on the traditional institution of obaship.

According to him, a police man should go to the Oba’s palace to make enquiries from him and not the other way round. “This kind of nonsense must stop”, he warned.

Also, he advised the Oyo State Government to encourage the establishment for the people of Iganna in the Iwajowa Local Government Area of Oke Ogun in Oyo State.

He stated that it was risky for the people living in the area to travel about 25 kilometres to another town before they could deposit or withdraw money.

Alaafin said the situation was a major challenge to the Deputy Governor, Chief Moses Alake Adeyemo, a retired bank official.

Chief Adeyemo stressed further that the call for the establishment of the bank was necessary to save the residents from armed robbery attacks.

He added that absence of a single bank in the whole of Iganna was an indication that the town was lagging behind in the area of social and infrastructural development.

Oba Adeyemi also tasked the Action Congress of Nigeria (ACN) administration to relocate the local government headquarters from Iwere-Ile to Iganna where it was initially located. (Source:Vanguard)

This monarch is a very fearless man.