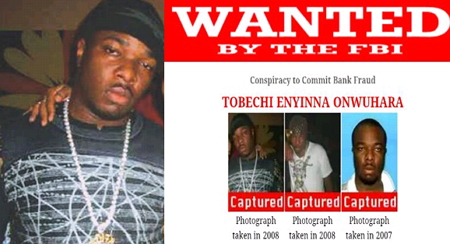 Tobechi Onwuhara, a notorious Yahoo Yahoo boy living life at large has been arrested in Sydney, Australia. He was declared wanted by the FBI a while ago.

Out of fear of being captured, he ran away from Florida in year 2008 before his arrest this year in Australia.

According to Sydney Herald, he owned a hip hop record label and he lived the high life of luxury hotels, gambling, strippers and bling. But behind the glitz and the glamour Tobechi Enyinna Onwuhara was one of the FBI’s most wanted men, allegedly a fraudster who scammed at least $44 million through cyber crimes.

But the sophisticated con artist, who fled Florida in August 2008 amid an intense FBI investigation, has been caught in Sydney and sent back to the US to face a string of fraud charges.

Nigerian-born Tobechi Onwuhara, 33, was “provisionally arrested in response to a request from the United States Government” in December last year, according to a spokeswoman for the Australian Attorney-General’s department.

A spokeswoman for the AG’s department said Mr Onwuhara is to face prosecution in the US for fraud related offences, including identity fraud and computer fraud.

“On January 29, the Minister for Justice [Jason Clare] made a determination to surrender Mr Onwuhara to the US.

“As a matter of long standing practice, the Australian government does not comment on operational matters,” she said.

Fairfax Media understands Mr Onwuhara had been living it up in Sydney after disappearing in August 2008.

The FBI’s website now lists Mr Onwuhara as captured, but with scant detail of the arrest. They were offering a $25,000 reward for information leading to his arrest.

The source who tipped off Fairfax said Mr Onwuhara had been making regular trips to The Star casino as well as splashing cash at numerous popular nightclubs.

“He would bet at the Star under a different name, he was a regular, then one day he just disappeared and someone told us he wanted by the FBI,” a source said.

According to the FBI’s most wanted list. Mr Onwuhara is wanted for his alleged involvement in an elaborate scheme that defrauded the financial industry out of tens of millions of dollars.

“Onwuhara is a key member of a group of Nigerians who allegedly have been conducting fraudulent banking activities from Florida and Texas, since 2005,” the FBI’s most wanted website states.

“It is alleged that the group has been using online internet databases to steal victims’ identities.

“Once acquired, they allegedly use the victims’ information to gain access to the victims’ ‘Home Equity Line of Credit’ accounts and wire transfer the money to accounts mainly located overseas, some in the United States.”

Some of Onwuhara’s alleged co-conspirators have been arrested, inside and outside of the United States, the FBI’s website states.

Onwuhara was charged federally with conspiracy to commit bank fraud, and a federal warrant was issued for his arrest by the US District Court, Eastern District of Virginia, on August 1, 2008.