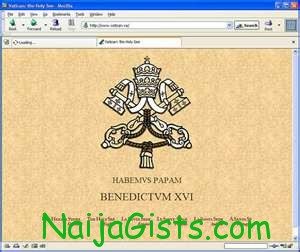 Anonymous hackers today took down the Vatican Website, stating it was targeting the “corrupt” Catholic Church, a day after a high-profile bust of the group’s alleged leaders.

“Anonymous decided today to besiege your site in response to the doctrine, to the liturgies, to the absurd and anachronistic concepts that your for-profit organization spreads around the world,” the hackers said in a statement.

“This attack is not against the Christian religion or the faithful around the world but against the corrupt Roman Apostolic Church,” said the statement, posted on the Italian-language version of the Anonymous website.

The same group of hackers tried and failed the same time last year before their successfully attempt this year.