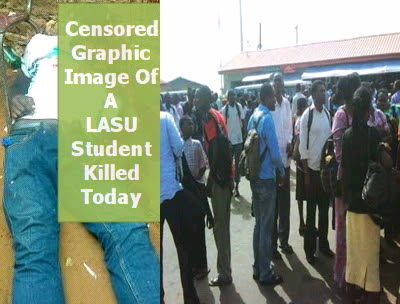 Two days after the sudden death of a popular singer Damino Damoche in the hands of some Lagos State University cultists, we learnt another LASU student has been killed.

According to sources, the intense rivalry fight between Aye and Eiye cult members is intensifying.

They have vowed to eliminate each other one by one.

Because of the gory nature of the image, we have censored it above.

The student was shot on the head by some suspected cultists.

Damoche, the LASU student that was killed on Thursday by Aye cult members was buried by his family members in Lagos today.

Enough of cultism and bloodshed!