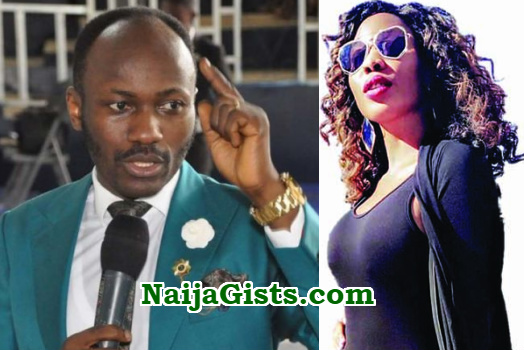 January 31, 2018 – Stephanie Otobo: Apostle Suleman Begs Me To Make Confession Video That Nigerian Govt. Sponsored Me To Lie Against Him

The alleged Jujuman who has come under intense fire for hypnotizing several of his victims in the past is yet to make his ways right.

The same thing is being witnessed in the case involving him and his top contender, Stephanie Otobo today.

The drama between the singer and Suleman is not over as a video Stephanie Otobo made months before she was hynotized to confess at Suleman church has been released by Worship Media.

Interestingly, Stephanie allegedly danced to his tune when she staged the confession at Sule’s church in Auchi last weekend.

Many people on the social media have tagged Suleman’s action as satanic manipulation.

Even before now, several of his victims have accused him of using Juju to manipulate them, so Otobo will not be the first.

Here is Otobo confessing months before she staged the fake confession.

Now that you have seen the above video of Stephanie talking boldly, can you see she is under duress in the confession video below?

If you watched the trend clearly, you will see that “Alagba Suleman” might have hypnotized Otobo to do what Kemi Olunloyo did at Pastor Ibiyeomie’s church few days ago to prove to Nigerians that he is a real Pastor.

We expect his social media workers to do overnight shift to produce videos to counter Otobo’s claim.

Watch out for end time Pastors!!!

A word they say is enough for the wise. #no time for silly argument. #Alhaji suleman na wuruwuru prophet.