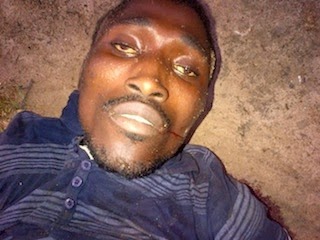 Anti-robbery police squad from Elere station and Area G command in Ogba Lagos earlier today foiled a robbery attempt along Orile Agege road in Lagos killing one of the robbers.

According to PM News, the 6-man robbery gang stormed 61 and 63 Orile Road at about 02.25 am and started robbing from room to room before a distress call was made to the Divisional Police Officer in charge of Elere Police Station, Phillips Eze, who led a combined team of anti-robbery policemen to the scene.

Isaac Tunde Vaughan, a 43-year old victim who lost four wrist watches, two mobile phones and N72, 000.00, told our reporter that the robbers on sighting the police engaged them in a gun duel and one of the robbers was killed while others escaped with bullet wounds.

“The one that was killed attempted to rape my wife after they had robbed us. It was at that point the police arrived. It was the exchange of gun fire between the police and his colleagues that made him stop harassing my wife and he was caught by bullets from the police.

“We thank the police for responding to our distress call on time. Otherwise something else could have happen as the dead robber wanted to rape my wife,” he said.

Another victim, Success Onuoha, a 24-year old an indigene of Imo State, whose head was broken with bottle by the robbers, said items he lost to the robbers are three phones, a wrist watch and his ID card, while Segun Azannai, 22, a native of Badagry, lost three phones, an Identity card and N90,000 to the robbers.

A Ghanaian, Samson Osei-poku, also lost his phone and N2, 000. A journalist with P.M.NEWS, Oluwole Adeboye, said if not for his burglary and doors the robbers would have gained entrance to his flat.

He said they only succeeded in tearing the net, adding that this is the second time in six days that robbers attacked residents in the area. He thanked the police for rising up to their responsibility on each occasion.