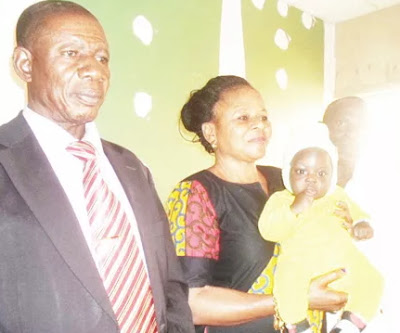 Shortly after he was sold to two different child traffickers, three-month-old Agbanwe Agbanwe was lucky to be recovered.

While his mother is already telling her own story, Baby Agbanwe Agbanwe Omogho will definitely tell his story when he grows up.

The threemonth- baby was sold and resold to traffickers. He was first sold to one Philip Umeh and later to another person in Abuja at N910,000 allegedly by one Mrs. Chinonye Agu, who pretended to assist his mother, Miracle, who needed help to raise the baby since she was a single mother.

Mrs. Chinonye Agu allegedly took Miracle to Onitsha, Anambra State in the disguise that she wants to set up a small scale business for her with which she would be using to carter for Agbanwe Agbanwe. 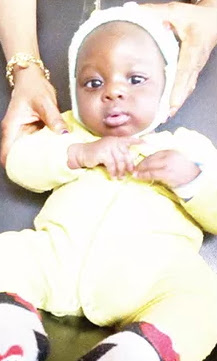 They took off to Onitsha. Miracle was complaining of ill health and Agu who is said to be a herbalist promised to give her some treatment to get better. On getting to Onitsha, they moved into a bush and arranged some fresh leaves which she squeezed and asked the teenage mother to drink.

After taking the herbs, Miracle lost her senses and became unconscious for three days. It was during this period that Agu finalized the process of selling the baby. The baby was sold to Philip Umeh by Agu while Philip sold to a woman in Abuja at N910,000.

“When I became so angry, Agu told me that I fell on my baby and he fell sick. She told me that when my baby fell sick, she took him to a Prophet in a prayer house and he died along the line and was buried immediately.

“At this juncture, I noticed that something has gone wrong. I told her that she should follow me to Abaogodo Okposhi Eheku my home and explain to my relatives what killed my baby and while he was buried immediately. We were still in Kogi where I was taken to when I fell unconscious after drinking what she gave me to drink.

“She agreed to come to our village. We finally returned home and she repeated what she told me in Kogi to my people. But my uncle, Cyril Enyi, opposed her and told her that what she said was a blatant lie.

He immediately alerted youths of our area, who came and surrounded our compound while my uncle rushed to Ezzamgbo police station in our local government and reported the matter. Policemen immediately came and arrested Mrs. Agu and myself ”, she stated.

The suspects were arrested by the police in collaboration with the National Agency for the Prohibition of Trafficking in persons(NAPTIP). NAPTIP Desk Officer in Ebonyi State, Mrs. Florence Onwa, explained that the baby boy and his 17-year-old mother, Miracle, were lured by a family friend known as Mrs. Chinonye Agu from their Community, Abogodo in Ohaukwu Local Government Area of the state to Onitsha, Anambra State.

Agu, she said, allegedly got N450,000 from the amount the baby was sold. She noted that the suspected trafficker drugged Miracle and took her baby away and later sold him to one Philip from Awgu in Enugu State, who later sold the baby boy to other persons in Kogi and Abuja respectively.

Onwa, however, stated that Miracle’s uncle invited police to arrest the woman trafficker when she brought Miracle back to Ohaukwu to inform him that the baby died in Onitsha when his mother developed mental illness.

The Director, Child Development and Social Welfare, Ebonyi State Ministry of Women Affairs and Social Development, Mr Godwin Igwe, appealed to relevant authorities to assist the Ministry in the rehabilitation of Miracle and her baby.

Igwe, who condemned the action of the suspected trafficker, Chinonye Agu, said the ministry was arranging for a legal aid to ensure proper prosecution of the suspect at a competent family law court. He called on government and public spirited individuals to help in rehabilitating the baby boy and mother.

He noted that the mother of the baby would undergo medical test to determine her status.

“We at the Ministry of Women Affairs have taken our action on this matter and we are going to conduct medical examination to ascertain if the baby and the mother are in good health”, he said.

He called on the Ohaukwu Local Government Area to come to the aid of Miracle, who he said lost her teaching job during the trying period. Confirming the incident and arrest of the suspects, the Police Public Relations Officer in the state, Mrs. Loveth Odah, said the suspects had been charged to court.