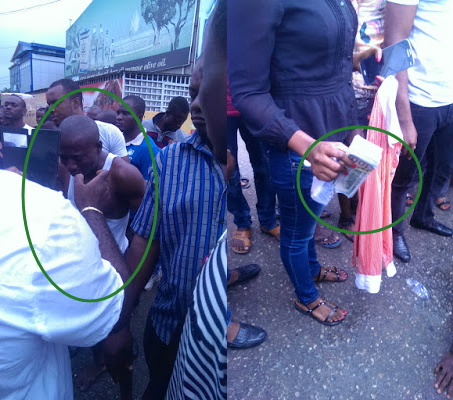 If you are trying to exchange money please do not use FCMB for now until police complete their investigation.

A man was duped of his hard earned N6 million last week by an Hausa Bureau De Change operator who allegedly said he bought the fake US dollars at FCMB at trade fair complex on Friday the 11th of September 2015.

The victim reported the matter to the Hausa man today when he learnt that the US Dollars were fake, the two later went to the bank to file a complain.

At the end of the day, the bank didn’t do anything, the victim was pushed out of the bank while the Hausa man was allowed to leave the bank secretly via the back door.

The victim threw tantrum infront of the bank and threatened to kill himself.  Other people joined him in the protest and ordered the bank to produce the Hausa man and the security officer who poured tear gas on the victim but the bank refused.