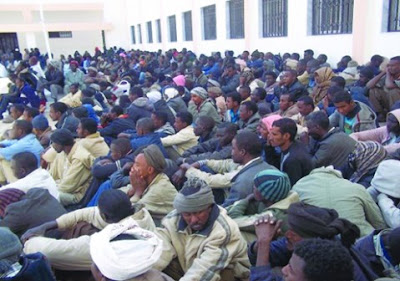 The Nigerian Immigration Service has commenced the mass deportation of illegal aliens arrested in different parts of Lagos State, southwest Nigeria following fears of the presence of suspected Boko Haram members in the state.

Security has been beefed up at strategic areas in the state to prevent attack on Lagos by Boko Haram extremists`.

In order to beef up security at the grassroots, Governor Babatunde Fashola met with thousands of officials of the Neighbourhood Watch outfit at the Lagos Television ground today.

Also yesterday, the Hausa community leaders in Lagos vowed to fish out members of the Boko Haram sect planning to attack Lagos.

P.M.NEWS gathered this morning that illegal aliens from Chad, Niger, Mali, among others will be deported in order to avert terrorist attack on Lagos, with a population of 20 million and the commercial nerve centre of the nation.

Police sources confirmed that over 50 illegal aliens were handed over to the immigration for screening and onward deportation to their countries immediately as they constitute security threat to the state.

It was gathered that 61 suspects were taken to the Lagos State Taskforce office at the weekend out of which 55 were handed over to immigration authorities for screening and deportation.

Our source added that the raid was ongoing and that the police would not relent until they fish out bad elements posing security threats to the state.

Following threats posed by Boko Haram, Fashola addressed thousands of Neigbourhood Watch officials today where he told them to brace up for the challenge ahead and ensure that terrorists did not creep into the state. The governor said the officers must police the grassroots appropriately and ensure that strange elements were identified, arrested and handed over to the police for prompt action.

He said the state relied and believed in them as grassroots security outfit to be vigilant and on the alert at all times and work with community leaders to identify people with nefarious purpose. Before the meeting, the Lagos State Government had been meeting with officials of the Neigbourhood Watch on monthly basis to evaluate how they have gone about policing the grassroots. Tomorrow, Fashola is also expected to convene an emergency State Security Council Meeting at the State House, Marina. He is expected to address top police, military, navy, State Security Service, SSS chiefs on the need to strategise to sustain the existing peace and security in the state.

Police Commissioner, Umar Manko, heads of military formations, among others will be at the meeting, which is expected to last for hours, after which the press would be briefed on the outcome. On Monday, the Hausa community leaders in Lagos said they would not relent until they fish out Boko Haram members trying to attack the state.

This follows the discovery of arms and bomb stocked by terrorists to attack Lagos at Aromire Street, Ijora Badia area of the state. The Seriki Hausawa of Lagos, Alhaji Sanni Kabir said this on Monday at the palace of the Ojora of Ijora in Ijora Badia, while on a solidarity visit to the monarch.

He decried the discovery of arms and ammunition in possession of terrorists planning to attack the state.

“We are part and parcel of Lagos State and this community. We will not destroy and will not be part of plans to destroy the state. That is why we are here on solidarity visit. The perpetrators must be fished out.

“All the Serikis in the state have resolved to be on the alert. If we notice any strange face in our community or suspicious movement, we will report immediately to the police,” he said.

According to Kabir, there is need for security agencies in the state to be proactive in their approach to security surveillance as they must beef up security in strategic areas.“I appeal to all our nationalities to be peace loving and remain calm as the they go about their businesses,” he said. The Ojora of Ijora, Oba Fatai Oyeyinka warned members of the Boko Haram sect to stay away from his domain.

The monarch blamed Bayelsa State Government for abandoning the property used by the terrorists to store arms, saying that he had written to the Lagos State Government to revoke the certificate of occupancy to the land and pull down the structure now serving as a haven for criminals.