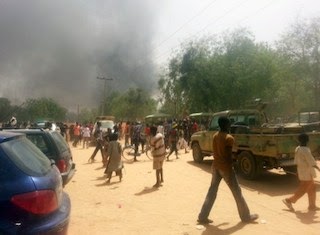 Pela Birni is a remote village under Kwajjafa District in southern Borno with Christian domination, and about few kilometres drive to Garkida town of Adamawa state.

Witnesses said, the gunmen who came to the village at about 10pm on Sunday with sophisticated weapons opened fire on their targets displacing hundreds of residents who are now taking refuge around the mountainous areas of Kwajjafa District and it’s environs.

Mallam Musa Anjili Pela Birni said he narrowly escaped being killed by the attackers, as the house he was sleeping in was also set ablaze.

“The gunmen invaded our village at about 10 o’clock in the evening on Sunday, they started shouting God is Great. In some houses, they did not shoot at the residents but ordered them to vacate their houses and set them ablaze, saying we are here for God work”.

Another Resident said most of the neighbouring houses near the Church of Brethren, were set ablaze including the church, while two persons were killed.

The Chairman of Hawul Local Government Area, Dr. Andrew Usman Malgwi confirmed the incident, lamenting that the rate at which suspected insurgents are holding people to ransom in Borno state and other states in the north east is worrisome, and calls for serious prayers from all and sundry.

“Yes there was an attack in one of my village (Pela Birni) yesterday (Sunday evening) which led to wanton killings and destruction of property. We have communicated to relevant security agencies on the matter who have swung into action with a view to apprehending the perpetrators”.

The military authorities later claimed that they killed over 250 members of the insurgent group.

EXPOSED: Building In Abule Odan Era Lagos Used By Criminals & Hired Killers
Let Us Celebrate Your Special Day With You