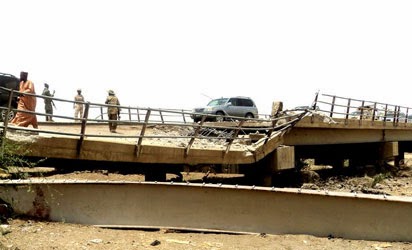 A large portion of the Madafuma Bridge was damaged, thereby making it impossible to link Maiduguri from Biu, Garkida, Numam and parts of Taraba.

A resident, Mallam Musa Yakubu, said the incident took place on Saturday at about 2am.

“We heard a loud bang and when we gathered in Madafuma village we found out that the bridge linking us with Biu Local Government Area and MA Dara Girau had been blown off. Motorists heading for Maiduguri from Biu especially long vehicles, had no option than to turn back to Gombe. Small vehicles managed to pass through the remaining thin portion which has not been affected by the blast.”