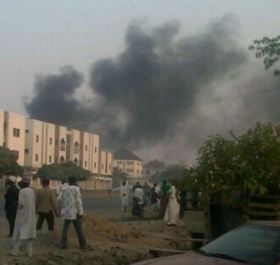 A tragic bomb explosion that hit a bus park in Kano today has killed 25 people.

According to the Joint Task Force, a bomb blast went off this evening around 6pm in new road motor park, a Christian-dominated area of Sabon Gari in Kano State.

As at the time of this report, no group has come open to claim responsibility.

Sabon Gari area of Kano is Boko Haram’s attack hotspot were several innocent people have been killed by bomb explosions in the past.

After months of failed dialogue between the federal government and the dreaded Islamic sect, a wealthy French businessman, Rachid Nekazz has offered to dialogue with Boko Haram and Ansaru leaders on April 1st, 2013.

He plans to stay for one week. Nekazz departure has been scheduled for April 7th.

When will these incessant attacks stop? God have mercy on your people o.