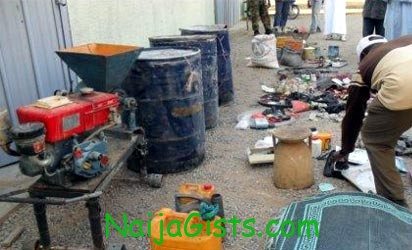 Recovered items from a Boko Haram bomb factory in Maiduguri

Boko Haram sect has, yesterday , confirmed that 3 of its members were killed by their own bombs in Saturday’s explosion in Shuwari, Maiduguri. naijagists.com

Spokesman of the group, Mallam Abul Qaqa, made the confirmation in a telephone conference with newsmen in Maiduguri

“We have hundreds of members that are willing to sacrifice their lives in this crusade; the unfortunate incident of Saturday will not discourage us; if anything, it will encourage us to strategise and diversify our techniques because we are not afraid of death,” Qaqa said.

The Joint Task Force (JTF) on Operation Restore Order had told newsmen on Saturday that three suspected members of the group died in an early morning explosion at Shuwari in Maiduguri.

Lt. Col. Hassan Ifijeh, the Public Relations Officer of the JTF told newsmen that large quantities of unused Improvised Explosive Devices, AK 47 rifles, ammunitions and other vital items were recovered from the scene of the blast.

The Boko Haram spokesman said “hundreds of our members were killed in 2009, but we remain resolute.”

He claimed that his men had repelled alleged attempt by security agencies to arrest some members of the group after cordoning off a house at Karkasara area of Kano.

He also claimed that the group set its men free by killing the security operatives.

Meanwhile, Mallam Abubakar Shekau, the “spiritual head” of the group has threatened to unleash mayhem on Kano unless urgent steps were taken by the authorities to stop the arrest of the group’s members.

Shekau said in an e-mail statement to journalists in Maiduguri yesterday that the group would “launch endless attacks on Kano following arbitrary arrest and persecution of its members”.

He claimed that the group had sent open letters to some prominent people including the Emir of Kano, Alhaji Ado Bayero, Gov. Rabiu Kwankwaso, Alhaji Aminu Alhassan Dantata and Khalifa and Sheikh Isiaka Rabiu. Shekau said the group had warned on the increasing arrest of its members but the situation had continued in spite of the complaints(vanguard).