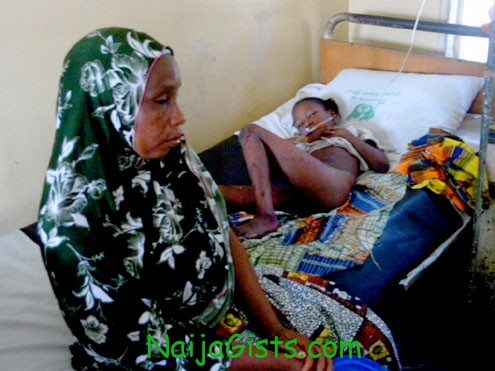 One of the bomb blast victims at the Central Hospital, Sapele, Delta State.

In an apparent retaliation attack over Christmas Day Bombing of a church (St Theresa Catholic Church) in Niger state by Boko Haram, the Residents of Sapele, headquarters of Sapele Local Government Area of Delta State, South-South Nigeria have been living in fear since yesterday when two unidentified men riding in a car threw an explosive into the Islamic school in the town.naijagists.com

Based on eyewitnesses account, the two attackers who drove off immediately targeted the mosque beside the Islamic school.

One person was critically injured and was rushed to a nearby hospital while at least 20 other Moslem worshippers in the mosque sustained injuries.

IT’s gathered that the mosque and the school were badly damaged by the devastating explosion.

A council official who does not want his name mentioned confirmed the incident to our correspondent this morning, adding that it has heightened the tension in the town.

He also confirmed that two unidentified men who were riding in a car threw the explosion.

As at press time, about 12 noon today, soldiers had cordoned off the mosque and the Islamic school along Boyo Road, Sapele.

A cameraman with Independent Radio/Television, ITV Benin City, Joe Amina was brutally beaten by soldiers who prevented her from taking the photographs of the affected mosque after the soldiers had taken over the area.

Another source said most of the injured are Moslem children in the Islamic school. The source confirmed seeing eight of the children.

Nobody or group has claimed responsibility for the bombing. While some people said the attack might be to avenge the bombing of a church on Christmas Day at Madalla by Boko Haram sect members, others argued otherwise.

However, a similar explosion rocked the same mosque about a month ago.

Sources blamed last month’s bombing on an in-fighting between two feuding groups in the mosque.

The second group said Sapele is not in the North and the worshippers understand English language.

The residents have been gripped with fear especially with the presence of soldiers at the scene of the explosion.