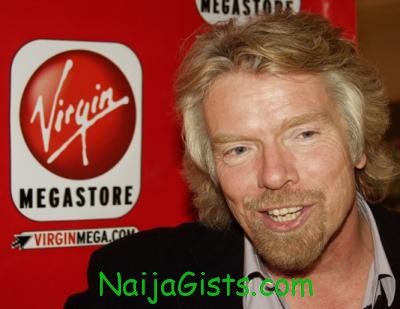 Sir Richard Branson, an English business magnate best known for his Virgin Group of more than 400 companies, on Monday, got perhaps the harshest words from fans after he critically blogged about Nigeria’s anti gay law on his “Virgin Blog”.

Branson blogged that it was sad to learn that Nigeria, at this age, passed a law to put gays behind bars – “just for being gays” – for 14 years. He, like other popular Britons including the British Prime Minister, David Cameron, openly condemned Nigeria’s anti-gay stand even at the risk of the anger of Nigerians who popularly support the law.

“Like everyone else in society, gay people have an enormous amount to offer and Nigeria should embrace them not prosecute them,” Branson, who once owned Nigeria’s national airline, said.

“All of us with influence in Nigeria must do what we can to stop this cruel law. I would urge educated Nigerians all over the world to do what they can to help fight this discrimination.”

He described the law as “sad, repressive and cruel” but that did not go down well with his Nigerian fans, it instead sparked a verbal war of sorts between Nigerians and Brits on his blog. Branson was not also spared as fans verbally attacked his personality.

“He claims to support gays yet he’s married with kids.  As much as I love your person I think you’ve crossed the line here. Mind your own business,”Efe-Ogege Olusegun commented.

if only we christians in Nigeria can take our stand and pray,we will be delivered from the hands of that devil wanting us to go against the mind of God,remember the Bible said “call upon me in the days of trouble and i will answer you” gay isn’t our culture and will never be.NIGERIANS BE WISE!

“Richard, you got it wrong this time. It’s a clear mandate from the Nigerians – meaning they don’t want gay. If you really care about Nigeria, there are various issues in the country that you and the so called educated Nigerians attend to not the gay law,” Eagle-Eye GP, a student of the Obafemi Awolowo University replied on the blog.

how many laws in nigeria interest Richard branson? is he also gay? the truth is that the polutant called america will stop at nothing to polute the whole world. it is the sad story of a country that had fallen into the hand of Satan. this great polutant america is driving the whole world into confrontation with God. Christmas season in america is now holiday season. the nation of anti-christ in our own time. what a pity?

“Sir Richard Branson, Nigeria just like every other African country has chosen to do what we think is best for us and we owe no one apologies for it,” Adedeji Adoyin posted.

I would urge educated Nigerians all over the world to do what they can to help fight this discrimination. who wants to fight stupid fight.
Richard Branson whatever you called yourself,this is Africa and we have culture.we are not like you guys that turn things upside down.we value cultures to preserve.
you can go back to wherever you come from and never return to this great country.

“It is really sad that SRB would give support to an immoral act,” Shomoye Taiwo said.

These man is stupid, if we had a gay and lesbian world before now, will he be born to come and be a billionaire now? His speech is because he might probably be one of them, who believe there is no God.

“U guys should leave us (Nigerians) alone. We don’t support and need gay marriage in our nation,” another respondent said.

The Nigerian Senate, last week, passed a law prohibiting same-sex marriage. The law provides that gay couples entering into either marriage or cohabitation will be jailed for up to 14 years.

“If there is any country that does not want to give us aid on account of this anti-gay law, it should keep its aid,” Senate President, David Mark has repeatedly said in light of the foreign criticism of the law.