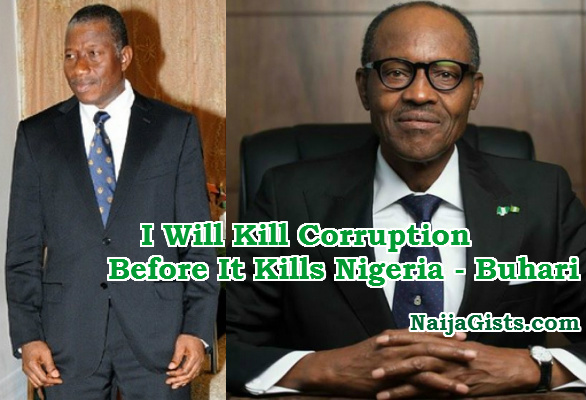 Presidency sources claimed that Ex-President Abdulsalami Abubakar was the facilitator of Buhari’s secret meeting with his predecessor, Jonathan on Thursday.

The meeting that held at Aso Rock on Thursday was made possible because of the Peace Deal agreement Buhari signed with Jonathan in the presence of the 2015 Elections Peace Committee.

During the meeting, GEJ reportedly sought for an understanding of the alleged corrupt practices and mismanagement of funds that happened under his administration.

An anonymous source at the meeting said GEJ claimed that he’s hearing about it for the first time but Buhari was said to have insisted that all the money looted under his administration must be returned to Nigeria’s treasury.

He also restated his pledge that Jonathan had nothing to fear at all, according to a source who pleaded not to be named because of the “sensitivity” of the matter.

Buhari, it was gathered, restated his pledge that Jonathan had nothing to fear. But he said there was no going back on the recovery of looted funds.

He said whatever steps or actions the President intends to take; it should be within the framework of the peace accord the two leaders signed. Obviously, he wanted soft landing.

“He also pledged to cooperate with Buhari as much as possible on all steps he is going to take.”

There were indications last night that ex-President Olusegun Obasanjo’s visit to Buhari was part of moves to “offer advice” to the President on the issues raised by Jonathan.