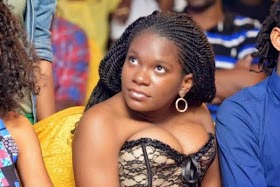 A young woman, member of Roman Catholic Church in Nairobi Kenya was recently disgraced for wearing an improper dress to church.

The lady identified as Julia, a regular worshipper at the said church was said to be in her mid-20s.

Around 8:30am on one fateful Sunday morning, she showed up in church wearing a black sleeveless dress, a yellow belt and high heels.

She was approached by a woman and a man in the ushering department who told her that her dressing is improper for a church service. They ordered her to go home and change into a proper outfit.

“Two people, a woman and a man told me that my type of clothes were banned from church and I should change into a proper attire.”

“If churches treat people this way, we will shy away from church,” Julia lamented on Facebook.

She took to Facebook to express her displeasure over the disgrace because according to her, some other ladies who wore mini skirts and spaghetti tops still attend big churches in the city without being sent home.