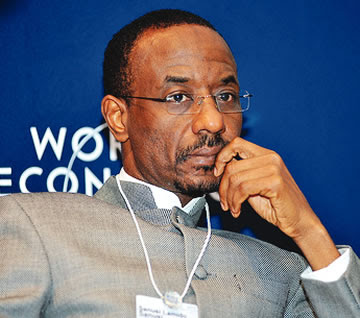 President Goodluck Jonathan and several of his close aides met today to remove the Central Bank Governor Sanusi Lamido Sanusi from office after the governor told his staff yesterday that he can only be removed by the President if 2/3rd majority members of the Nigerian Senate decides against him in a vote.

Faced with that difficult choice since majority of his Peoples Democratic Party (PDP) have decamped to the All Progressives Party (APC), the President and his aides decided on the new strategy which was to suspend the Central Bank Governor and use security agencies to prevent him from entering the premises of the bank until the end of his tenure in June 2014.

Mr. Sanusi became a high value target for the President and his team after a letter he penned to the President in September 2013 about the Nigerian National Petroleum Corporation (NNPC. In the letter Mr. Sanusi accused the corporation of stealing $50 billion from proceeds of crude oil sales.

The later was later leaked to the press. SaharaReporters was first to reveal the content of the letter.

Mr. Jonathan and his aides of accuse Mr. Sanusi of conniving with opposition politicians including former President Olusegun Obasanjo to bring down the Jonathan regime by leaking the letter.

The meeting today calculated that if Mr. Sanusi is suspended, he will go to court to seek redress while the President then appoints current Deputy Governor of Financial System Stability, Kingsley Moghalu as interim CBN Governor to oversee the affairs of the bank until a substantive governor is appointed in June.

Sources at the Presidency told SaharaReporters that because Mr. Sanusi has remained adamant in exposing the corruption perpetrated by the NNPC, insisting that a proper audit of the account of the corporation be carried out by an external auditor especially after the NNPC could not still account for $18 billion in crude oil sale between January 2012 and December 2013 in recent accounts reconciliation meetings between the CBN and NNPC.