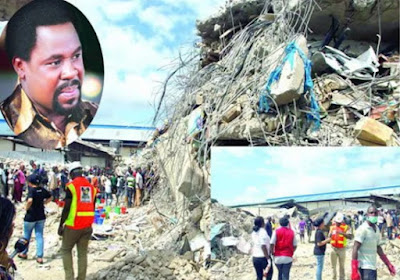 2 South African children have filed a suit against the founder of Synagogue Church of All Nations, Pastor Temitope Joshua and seven others over the death of their father in the September 2014 building collapse in the church.

They are seeking an order directing Joshua and other defendants to pay them R8, 772,000 as cost and damages for the death of their father, Kalambaie Wa Kalambaie.

They claimed that the deceased was one of the 116 people, mostly foreigners, killed in the building collapse.

Also joined in the suit are – Lagos State Attorney-General and Commissioner for Justice and the state Ministry of Physical Planning and Urban Development.