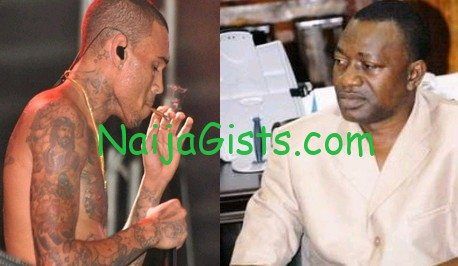 March 8, 2013 – Chris Brown Must Be Arrested For Smoking Weed On Stage In Ghana – Ghanaian Minister Of State Says

Chris Brown who performed in Accra Ghana on Tuesday has sparked public outrage after he was caught smoking weed live on stage.

According to Minister of State for WA central, Rashid Pelpuo, Chris Brown’s act was very disturbing and unacceptable.

He further said Chris Brown must be arrested for smoking Marijuana on stage.

Rashid’s comments come shortly after the singer allegedly smoked on stage, substances said to be weed, during the Hope City Concert financed by rlg.

“This is appalling. It is unacceptable. In Ghana we have laws and one of the laws is to ban drugs be it marijuana, ganja, weed or whatever it is being called.

“It is also internationally recognized that it is part of the group of drugs that should not be taken openly by people.

“So if Chris Brown did that, without recourse to our laws, it is so disturbing.

“…He is bringing in a culture which is contrary to the culture here. I don’t know whether he is not informed about it. But if he is informed and he has done that he has contravened our laws and he has to be cautioned and or arrested.

“…At the point he did it I think the police should have gone for him and I think that is unacceptable,” Rashid Pelpuo said.

The show organisers have described the incident as very unfortunate.

The financiers of the concert also issued a statement shortly after the show saying they disapprove the smoking.