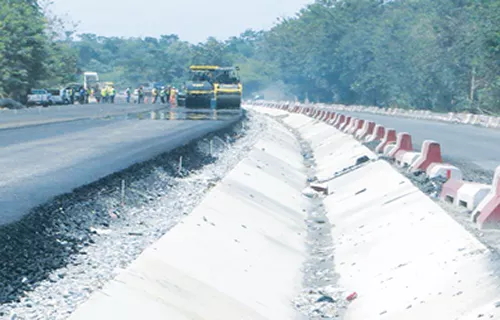 Speaking during the inspection of the 40-year old bridge by the Minister of Power, Work and Housing, Mr. Babatunde Fashola and other officials of the ministry yesterday, Project Manager, Julius Berger Plc., Mr. Wolfgang Panzer said that his company had removed the derelict two-layer asphalts of the bridge on both sides and covered them back within the stipulated time.

He told the minister that works were already ongoing on other adjoining bridges on the route. According to him, the road’s work had reached one side of kilometre (km) 46 of the Lagos-Shagamu interchange from 30km.

He hinted that his company would soon commence the second phase of the road between 20km and 50km. Before now, thousands of Nigerians travelling to and fro of Lagos State had suffered consistent terrible gridlock on the road, especially the long bridge portion of the Lagos Ibadan expressway due to its partial closure by Julius Berger Plc.Lagos-Ibadan expressway’s rehabilitation and expansion was awarded to the duo of JB and RCC at whooping N167 billion two years ago by the immediate past administration.

Work Minister, Fashola expressed satisfaction over the project but told the general public that the contractor would still need to install about 44 joints on both sides of the bridge.

He commended the contractor for completing the bridge before December 31st deadline to allow ease of movement during yuletide, explaining that the contractor had to move 35,000 tonnes of excavated materials from the road and replaced them with 35,000 tonnes of asphalt from its plant, moving out 25 trailers daily to meet up. “As the project goes on, the contractors have to move out 1,000 trailers’ aggregates,” he said.