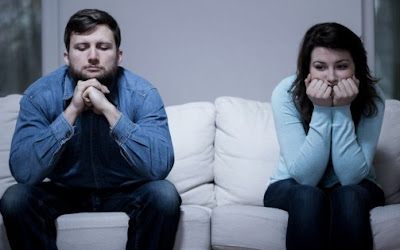 Insecure men read meanings into everything you do. They suspect your every move.

Insecure men are good at bringing drama into your life. Any sensible lady who wants the best for her life and future should stay far from insecure men.

At first, an insecure man might seem very loving and romantic. He endlessly compliments you. He repeatedly tells you that he can’t believe you agreed to date him since you are so above his league.

He treats you like a princess and you feel you have hit the jackpot with him. His flattery is out of this world. You are swept off your feet. It’s refreshing to feel so appreciated, especially if you have dated a few self-absorbed men in the past. You begin to think that maybe he’s “the one.”

But you will discover soon enough that his sweet attentiveness will turn into an obsession. It will then take all of your energy to assure and reassure him that you love him because he doesn’t believe you. His presence in your life starts draining you.

Any man that thinks you still have feelings for your ex even if you haven’t given him reasons to doubt your love for him is insecure. He’s convinced you aren’t over with your ex, even if you have been broken up for years. His insecurity is so overwhelming that he suspects everything you say or do is because you still love your ex.

An insecure man needs constant validation and it’s not healthy for any woman. If he frequently asks you questions like, “Do you love me?” he is fishing for compliments. Then when you assure him that you do find him attractive, he doesn’t believe you. I wonder why he asked in the first place.

Everyone likes to hear that they are loved, pretty, talented, attractive, intelligent and desired, but his needs go beyond those of the rest of us. He generally suffers from low self-esteem, which incidentally is the driving force behind many of his insecure behaviours.

An insecure man is jealous of the time you spend with your friends. They are the ones who will insist on sniffing your pants when you come back home just to be sure that you didn’t sleep with a man when you were out.

He also doesn’t like you going shopping with girlfriends, and heaven forbid you have any platonic relationships with men. It automatically means that you are cheating on him. That will earn you the title of a whore. He frequently calls and texts to check up on you when you are out without him.

At first, his possessiveness may make you feel special and wanted. But after some time, that possessiveness will become exasperating when you feel you can’t do anything with your friends without upsetting him.

If your man constantly threatens to break up with you, he’s insecure, dump him before it’s too late. You don’t need such a drama king in your life. He is playing games with your heart and feelings and you deserve so much more than such a loser.

If he says things like, “I don’t feel wanted” or, “I don’t think you really love me”, he doesn’t really want to end the relationship; he’s hoping you will beg him to stay. If you do, it validates his fragile ego. If you don’t, he will take it all back and do whatever he can so he doesn’t lose you. You really don’t know where you stand with an insecure man.

He’s constantly testing your devotion to him and demanding that validation he so craves. Eventually, you will either be stuck in this unhealthy relationship or you will tire of this little game and gladly let him leave the next time he threatens it.

An insecure man talks about his exes and how they cheated on him. He paints himself as a saint and claims the women he dated in the past are all bad. His exes never really loved him. He insists that in every past relationship, he was the innocent victim. No one loved him. They used him and cheated on him.

An insecure man stalks you on social media. He’s always aware the very second you post a status update on social media. He follows you and always knows what you are up to. He gets upset when your friends compliment you. He commands you to take down your posts and sometimes insist that you close your social media accounts if you really want your relationship with him to work. Ladies, don’t marry such a man.

An insecure man checks your phone. He may nonchalantly ask who you are texting or he might outright demand to see your phone. He oftentimes feels like you are hiding something from him if you are on your computer or phone, even if you are just checking your work email or texting your girlfriend.

If he always thinks you are being unfaithful, he’s an insecure man. He always has suspicions that you are cheating on him. He may accuse you of flirting with other men, having an affair with a co-worker, or just looking around for someone better. He feels he’s not good enough for you, so it’s just a matter of time until you find someone better.

If he gets upset that you can’t be with him all the time, he’s insecure. He wants to see you every day and gets upset if you have other responsibilities that take you away from him. He has a way of making you feel guilty if you need to work, run errands, or meet a friend and can’t go out with him.

An insecure man’s moods depend on you, which is a great burden to bear. It’s normal and it’s a good thing to be sensitive to the moods of your partner, but with an insecure man, his mood will be totally dependent on you. If you are happy and loving toward him, he will be in a good mood.

If you are busy and don’t have time to constantly assure him that you are in love with him, he will become sad and depressed. His behaviour puts an extraordinary amount of pressure on you to always make sure you are in a good mood so he doesn’t get down. Who wants to be babying a grown-up man this way?

An insecure man is overly sensitive to criticism. If you open up and tell him that he’s smothering you, he’s likely to turn the tables against you. Instead of listening to your concerns, and reflecting on his behaviour, he’s more likely to turn around and accuse you of cheating on him or trying to leave him.

So, ladies, if your man exhibits some of these signs, break up with him. Don’t marry him and start crying later. Don’t claim that your love will change him. Marriage doesn’t change people; they have to make efforts to change by themselves. Marriage has a way of amplifying negative behaviours.