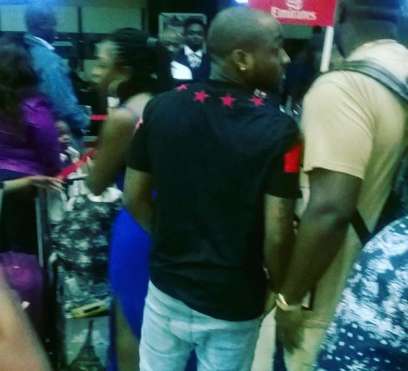 Davido was about embarking on a medical trip with daughter to Dubai when authorities at the MMIA barred him from travelling out of the country.

Out of anger, he took to the social media to bash Ovation Magazine publisher, Chief Dele Momodu for liaising with airport officials who prevented him from travelling out of the country.

The single father of one has since apologised for calling out Momodu earlier today.

Read his own side of the airport drama below:

In 2015 May, I became the father of a love-child. DNA testing determined with maximum proof that I indeed was the father of my daughter, delivered by a head-butting casual lover, Miss Sophia Momodu.

I met Sophia when I was barely 21 years old. She was many years older than me and was able to manipulate and exploit my youth, naivety and generosity.Sophia is the mother of my daughter, and no more ! She never would be my wife and she was never qualified for that status. Her background is very dissimilar from mine, and she has very paltry education and equally diminished physical attributes.

Cunningly, she moved into my house because she claimed she has no place to stay in Lagos and that her father is late and her mother is resident in Abuja.
I have accepted what providence brought my way including my own personal indiscretions. But I also have been burdened by the gave lapses in the character of Sophia and have thus suffered for my daughter who I love as much as my late mother, Imade.

As for the person of Sophia, I paid a two year rent for her apartment at Lekki and she receives a monthly allowance of 300,000 naira from me ever since Imade was born. This December, Sophia received 500,000 naira as her Allowance and Christmas bonus.
On a routine hospital check, my daughter was found to be infested with massive dosage of poisonous cannabis that she contracted from the breast feeding regime of her mother’s breast. We still don’t know how much Imade was damaged by this toxic feeding and medical tests and procedures continue to rise and bemuse me and my family members.

Already, Imade has special needs and has been treated at the American Hospital,Dubai with all medical costs and travel expenses drawn off my personal purse ever sine she was born.
On December 29, Imade was supposed to travel, once more, to Dubai for further medical care. A family vacation was attached to this medical trip. But our family plan was truncated by Sophia, her uncle, Dele Momodu in the company of his wife, and all these persons were the significant accessory to the Lagos Airport debacle.
It is this incidence of December 29 that made implicitly necessary to bring my family matter to the public domain. I agree, both parents have to give simultaneous approval to the travel plans of an infant. But I do not intend for Sophia to join me on this trip as if we are going away on a spousal honeymoon. It is also fair to allow her to come along if she could pay for the costs of her own trip.

Why must I bear medical expenses for my daughter as well as the travel cost of her mum, who is neither my wife nor a friend at all? By what authority or court documents was Dele Momodu enabled to stop my child who embarked on a medical trip that would improve her wellness. I David, the father of the child was already available to attend to the child’s care? Which Agency of government, as claimed by Dele Momodu and his wife, issued the authority to deny my sister, myself, my daughter and my dad on a rightful travel plan? And what has been the financial stake of Uncle Dele Momodu over my daughter, ever since she was born.

I am 23 years old now. Sophia got me and appropriated me at 21. I have just unbridled my life from her diabolical and shameless stranglehold. She should find her own life and leave me alone. Her uncle too should help her to quit the streets and find her a career. I am not her meal ticket or ATM because she has a baby for me. I love Imade and would do everything to defend this innocent baby that is being abused by callous adults for extortion purposes.

As for me, I feel bad that my dad, who had boarded Emirates and was already issued a boarding pass but was forced to elect not to travel anymore because his daughter and granddaughter were prevented from travelling on December 29 by the Momodus. The passports of my daughter and sister were impounded for no just cause. The airline has refused to give a refund because my dad was already allocated a seat and boarding pass. Calmly, he lost over One and half million naira for his

First class ticket. What is the loss to Uncle Dele Momodu in this matter ? But more precisely, what is his gain ? But o know who the real losers are.
Our lawyers are looking into the books and digging for legal recompense. The authority used by Uncle Dele Momodu is the callous enforcement of corrupt practices in the conduct of an ordinary domestic issue.

Uncle Dele Momodu has boasted about possessing certain things he knows about me and my family. I dare him to publish or perish whatever he has in his pouch, globally!

Happy New Year in advance to you all.

22 thoughts on “Davido Stopped From Traveling To Dubai With Baby, Singer Says Babymama Sophia Used Charm On Him”