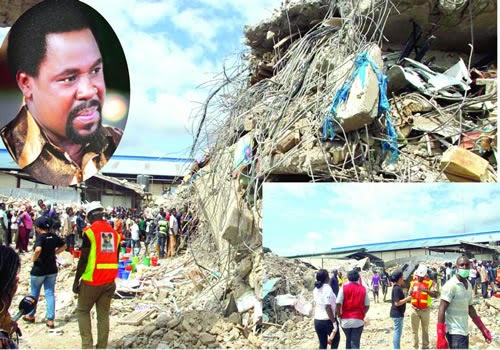 More dead bodies have been pulled from the rubble of a building that collapsed inside prophet TB Joshua’s church premise on Friday.

As we speak, the recorded death toll is 62.

According to NEMA Officials, rescue effort to find more victims and survivors will end on Wednesday.

The guesthouse at the Synagogue Church of All Nations in Lagos’ Ikotun neighbourhood collapsed on Friday, leaving scores trapped in the debris.

She was able to walk away from the collapse with just a broken wrist. The discovery prompted rescuers to slow down their digging in the wreckage of the guesthouse.

The affected building housed over 300 foreigners and Nigerians who see the televangelist as their prophet.

May the souls of the victims rest in perfect peace.