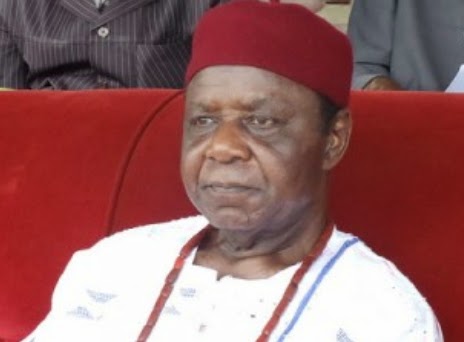 Uwechue, 79, died in Abuja on Thursday.

Okafor said that Uwechue was an illustrious son of Ogwashi-Uku community in Delta describing his death as a big loss to the Igbos, Delta and indeed, the entire nation.

“We feel very sad, and can’t believe this. Uwechue was good to our community, he was an exceptional human being that was loved by all.

“He was a pillar to Ogwashi-Uku Development Union, he supported us and we could always rely on his useful contributions to our people,” Okafor said.

In his reaction, Chief Lawrence Okolobi, the spokesman of Obi of Ogwashi-Uku, described Uwechue’s demise as a big blow to the community.

“As a president-general of Ohaneze Ndigbo, he tried to unite the entire Igbos with his ideology and the Igbo race will ever remember him for that.

“We are really saddened because we have lost an illustrious son,” Okolobi said.

He attended St. John’s (Rimi) College, Kaduna from 1949 to 1954 and was retained as a teacher in the school for 18 months before he proceeded for further studies.

Uwechue holds a bachelor’s degree in history of the University College, Ibadan, 1960 and a Diploma in International Law and French language from the Geneva African Institute, Switzerland in 1964.

A career diplomat, Uwechue joined the Nigerian Foreign Service at its inception in 1960, and served in a number of countries, including Cameroun, Pakistan and Mali. He was Nigeria’s first envoy to France and opened the Nigerian Embassy in Paris in1966.

Uwechue also served with UNESCO in Paris as Consultant on “General History of Africa” project between 1967 and 1970.

He retired into private business in 1970 as Publisher and Editor-in-Chief of magazines and books on Africa, published in both English and French.

He is the Founder and Editor-in-Chief of the renowned KNOW AFRICA books – a three-volume encyclopaedia comprising Africa Today, Africa Who’s Who and Makers of Modern Africa.

As Ambassador Extraordinary and plenipotentiary, Uwechue in 1999, became the Special Presidential Envoy on Conflict Resolution in Africa to former President Olusegun Obasanjo.

He brought his international experience, connections, immense knowledge and passion for Africa, to bear on his assignment.

He played a key role in the peaceful settlement of the decade-long Sierra Leonean civil war, which culminated in free and fair elections in 2002.

As Obasanjo’s envoy on Conflict Resolution in Africa, Uwechue also heads the ECOWAS Mission in Cote d’Ivoire, charged with coordinating and monitoring peacekeeping operations toward the resolution of the crisis in that country.

He was appointed chairman of the Accra III International Monitoring Group, which reported regularly on the situation in Cote d’Ivoire to the ECOWAS Authority, the African Union and the United Nations.