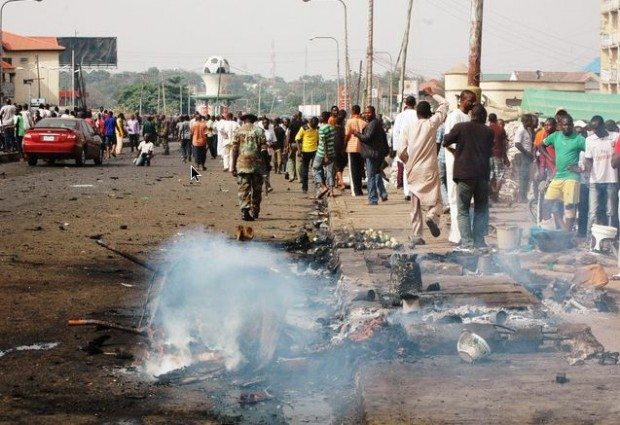 According to reports, 20 people have died.

Here is what the official statement

“Now we have 20 dead from the twin explosions,” said the official who was not authorised to speak publicly. “Bombs concealed in two cars went off just opposite this church.”

“We have a bomb explosion. We are trying to sort things out,” police spokesman Aminu Lawal told AFP.

Residents reported seeing dead and injured being taken away. One resident said he saw at least two dead bodies.

“While we were there, two dead bodies were brought out and loaded onto a waiting van along with 10 injured, but while the recovery and rescue operation was going on we were chased away by soldiers and policemen who cordoned off the area,” he said.

Another resident said that “from my balcony, I could see policemen loading the dead and the injured into waiting vans.”

One resident said the explosion was strong enough to shake his house and cause his ceiling to cave in. He ran to the site, which had already been cordoned off, but he said he could see damage to the Assemblies of God Church and cars.

These is one of the series of Religious attack that have been carried out in the past month by Boko Haram.

May God deliver this nation from this evil beasts called Boko Haram.

Without doubt, Boko Haramists are hired terrorists operating inside Nigeria.