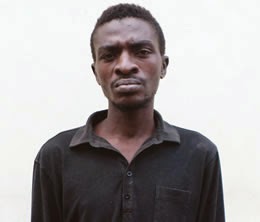 John James, a member of Eiye Confraternity group has been arrested for allegedly robbing a hairdressing salon in Festac, Lagos.

In his confession, James said he had earlier taken part in two robbery operations, before he was apprehended by SARS.

He said, “I was formerly working with a sugar company. But later, I quit and began my barbing salon. I was running the barbing salon at Ojo Road, Lagos. On that day, three of us had gone for the robbery operation. We collected three phones and N15,000 from the women in the salon. This is not the first time I would be robbing a hairdressing salon. We once robbed a salon at Orile Iganmu also this year.”

“I belong to the Eiye Confraternity. But in 2012, I was arrested by the police in Old Ojo Road for street fighting. Then, I was arraigned at the Agbo Malu Magistrate’s Court and remanded for about two weeks. Concerning this robbery, the gun they caught with me is not mine. It belongs to Jude, my gang member,” he said.

5 thoughts on “Eiye Cultist Arrested For Robbery At Hairdressing Salon In Festac, Lagos”