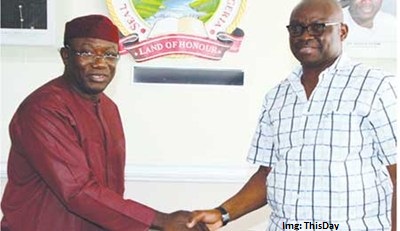 If you are talking about results from a population of 2.3million. With over 1.6 million eligible voters and 700 thousand plus registered voters from which meager figures of 100, 200 and 40 thousand, totaling just about half of registered voters voted, as victories and loses, then you can have a field day celebrating or crying. But if you are really recognizing the depressing reality and hopelessness of Nigeria under its current democratic, if we can use that term, dispensation; then the results of the Ekiti election are a cause of consolidated grief and reason to ask – when will the people stand up?

I can amass 200,000 people in Ekiti tomorrow, not just to vote for me, but even for a simple jamboree. In this light, both Fayemi and Fayose lost woefully. Our Ekiti election results are a disgrace and sham of democracy. But frankly, people like us never expect much better from European political democracy as adopted by Africans. It hardly ever fails to produce such meaningless results. 200,000 votes to represent a ‘choice’ of the people? The mere thought is criminal. A democratic institution that attempts to present people leaders based on such 5% fraction of the population having participated in choosing should have its offices sealed off permanently with workers inside.

The result from Ekiti did prove however that the people rejected governor Fayemi, but also rejected ex-governor and now governor elect Fayose. They did not bother to leave their houses for neither. Sadly the highly intelligent people of Ekiti did not see anyone worthy in the list; had next to no fate in the democratic process – not wishing to go cast votes that will be discarded without being counted or to be intimidated by the security legions, double the number deployed to terrorized Borno, and would simply not be bothered for any reason to participate. They stayed home and watched the World Cup… or rather, not having ‘light,’ they stayed home and sat outside in the shade, trying to cool off and wondering when Nigeria would wake up; when true revolutionaries will come and take advantage of any system to transform Nigeria. They sat and thought about how two groups of not too smart people were mostly voting, not for, but voting against the other person. Really and truly, many who voted for Fayose were voting not for Fayose, but against Fayemi for their grievances with him and his party, and likewise, many who voted for Fayemi were doing the same against Fayose. The rest were exercising their rights to scoops of rice.

Which rogue is next? Abacha’s victory in Kano? Until and unless APC gets off their high horse and invites revolutionaries and new generation youth into and to control their party, their victories at all levels other than the Presidency – where humiliating victory has long been certified – will not be guaranteed and PDP will simply purchase their way to victory at all local levels, facilitated by military intimidation campaigns, state to state, local government to local government.

Nigerians will never step out of their houses to vote until and unless they see something worth voting for. This is the true lesson of the Ekiti election. Meanwhile, we the people are still preparing for our second independence this October 1st, 2014 – via The Nigerian Masses Revolution – when by God Almighty’s grace, we will have successfully expelled the Cabal from every nook and cranny where they hide their dirty, insatiable, thieving selves in positions of authority, holding our nation to ransom, keeping us murdered, abducted, displaced and raped every day and leaving our great nation of great nations as a global sleaze pit and laughing stock.