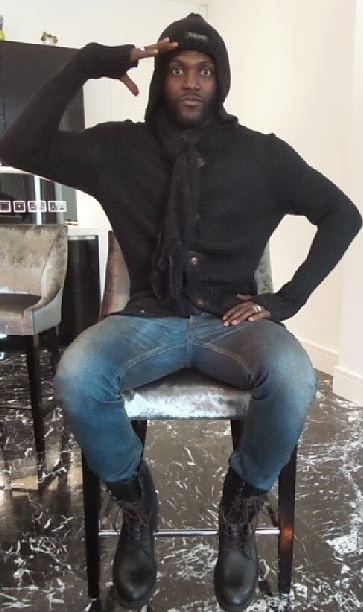 Footballer Emmanuel Seyi Adebayor’s Facebook publication which he used to launch various rants against his mother and siblings has thrown up a huge controversy in Togo.

The former Arsenal and Manchester City player released a diatribe in recent weeks to re­veal numerous humiliations he had endured as he took a decision to withdraw his properties from his immediate family.

However, the revelation has created divergent views among the citizens in his country of birth. While some are unwilling to discuss the issue with the press, others joined in the debate which borders on Emmanuel Adebayor’s maternity.

A man, Tsodjine Jacques, who claimed to be in his late 60s stressed that Hajia Alice Adebayor is not the biological mother of the former Real Madrid star. The dark skinned man, who Sunday Sun met in Avedji in Lome, supported his views with the fact that Adebayor’s mother is based in Ghana. “The fact is that Seyi gave them the op­portunity to reap from his success without look­ing back. He made them comfortable but they failed to utilize the opportunity. A lot of Togo citizens know the truth but they are less perturbed because Seyi’s wealth is none of their business”

Sunday Sun also came across Samuel Kokou in Adjololo which is closer to Didjole where Emmanuel Adebayor owns one of his houses. Kokou stated that Hajia Adebayor couldn’t have been disgraced by the football star if she is his biological mother.

“It’s not a new development to me but I have heard people discuss his maternal issues and what startled me was when I saw the old woman return to the market she sells spoons and other cooking utensils. I am aware that she’s not been there for more than a decade until she moved out of Seyi’s house and had to go back in a bid to make a living.”

When Sunday Sun met Hajia Adebayor at the Market, in the border town of Kojoviakope, where she displayed her goods on a muddy road. She sat quietly in front of her shop which is just one of the many unprotected and open kiosks that lined up the market opposite the beach. She refused to make any statement about the linger­ing crisis while stating that her eldest daughter, Iyabo gave a directive that no one should talk about the issue again. The fair complexioned sexagenarian looks quite pale as she managed to put up a smile that reveled her gold colour lower incisor on the right side of her dentition- a tooth usually used to identify some who had visited Saudi Arabia for the hajj.

Bernadette Parfait of Gnekonakpoe submitted that the truth about the maternity of Emmanuel Adebayor can only be revealed by the mother or the player. “No one can tell who the biological mother is but the woman herself or Seyi if any of them decides to do so. In all, I put the blame on Seyi for revealing so many negatives about his mother and siblings. For me, it’s really sad and absolutely unacceptable.”

However, Emmanuel Adebayor’s younger brother, Rotimi downplays the comments on the maternity issue calling it a worthless rumour.

“It’s all blatant lies to further open wounds on the current issues. He is my elder brother and we know who our mother is. I don’t listen to rumour peddlers who always look for the downfall of others.”

The FC Royale of Benin Republic striker has also apologised while asking his elder brother to forgive and forget in memory of their father who died in 2005.

The Adebayors hail from ‘Odo-Otin local government area of Osun State in Nigeria. Their father is from Igbaye while their mother comes from a neighbouring town called Ekusa.