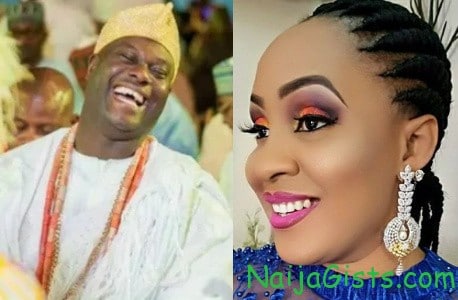 Friends Emmanuella Ropo, the alleged lover of Oba Adeyeye Enitan Ogunwusi, the Ooni of Ife, have come out to debunk her claim that she was not in a relationship with the Yoruba paramount monarch.

“We have read the Internet report of Oba Adeyeye Enitan Ogunwusi, the Ooni of Ife’s alleged romance with Emmanuella Ropo, and also noticed the drama Ropo put up through a video clip to negate the report, alleging her “friends” to be behind the report.

We want to categorically state that we salute the quick response of the palace to the report. We would have kept quiet on all those melodrama, but for the purpose of setting the records straight and letting people know that all her displays in the video were mere drama.

The response of the palace, through The Boss newspapers, was apt; we read in particular where the palace indicated that “the Ooni cannot marry a woman who has mothered three children from two different men,” it was also noted that for the first time, the Ooni discovered that Emmanuella is not that single woman, as portrayed by the “Scout”, whose trade in stock was to go out and look for an “Olori” for the Kabiyesi.

The “Scout” who has been on the street requesting every fair lady her path has crossed, to come and marry the Kabiyesi, as if the Kabiyesi is not man enough to find himself a wife. Her sole aim is to control the palace fully.

The other point the palace’s response also outlined is that “Reports have it that she’s personally interested in having the monarch pronounced her as lover”, a phrase that indicates that the palace even noticed that Emmanuella has been moving up and down, with the effort of her scout to make her become an Oloori, so why the pretense by the intending Oloori?

The questions emerging are: Why then would Emmanuella want to hold her “friends” responsible for the revelations that even the palace noticed it be somehow true? Were her friends involved when she started having an affair with Engr. Toye, a good and childhood friend of Ooni Adeyeye three years ago?

Were they involved when after a bank seized her Jeep, due to a bad loan of twenty five million Naira, and Toye borrowed her his own car and had to withdraw it when the bank attempted to seize that (although it was learned Ropo accused her best friend Tope of being behind Toye’s action)?

Was any of her friends involved when Toye heard about her move to Ile-Ife and she went flaunting herself as the next Oloori, an act which made Toye confront her, and reminded her that Ooni is his childhood friend, and that she should perish the thought of becoming an Oloori?

Emmanuella, your response was that Toye can’t stop you from getting the Oloori stool, a situation which resulted in a shouting match and you became violent, by hitting Toye’s head with a shoe, accusing him of trying to ruin your chance of becoming an Oloori. All this brouhaha happened in Abimbola Awoliyi Estate.

You remember how you threatened him, that it’s because he’s alive that is making him block your chance, and that you will show him that your father is the head of the native doctors of your village. Was any of your friends involved, when you moved in your live-in-lover, Femi, to stay with you at your rented apartment in Anthony Enahoro Estate at Ogba?

Were they involved when you threw him out because your net caught a big Customs officer, and in order to have your good time with him, you must do away with Femi by shunning him off?. The Customs boss, who happened to be your uncle’s friend, had to abandon you after three months of the relationship, because you threatened to deal with his wife, which you perceived to be overbearing, and really the woman became so sick and defied all medications until she was taken to a prayer mountain.

Were they involved when you had a “lovely” night with him on the eve of his wedding, and his bride was searching for him everywhere?

Were they involved, when after the wedding, the groom, rather than stay with his wife, packed in with you?. Emmanuella, you claimed your friends picked those pictures from your phone; so hilarious, when you know that your phone is on per-second-lock, and your password is stronger than the one that opens the Central Bank, who can access your phone? Who? And you know nobody can! Emmanuella, stop holding your friends responsible for your predicaments, Stop!

You know all of them are busy and successful in their chosen fields of endeavours, so they have little or no time to think about you. You have threatened to mention names; your friends are waiting to respond to you accordingly, even with more mind-boggling revelations. You have a sad past, a confused present, but be rest assured your future can be well managed if you so desire; so start placing emphasis on a course that will advance your course in life, as you should know that success is not contagious. Work hard for your success, rather than frolicking with “big men”. Bye for now, you may soon hear from us, if need be.” (sic)

Emmanuella Ropo, the lady that was reported recently by a blog, Newsmakersng.com, to be the new Olori of the Ooni of Ife, is said to be a mother of three, and said to have thrown out her lover Femi because of her dalliance with the Ooni.

The pretty lady has debunked all the reports in a video aired by FlipTV.

She said she knows the detractors behind the reports and ready to call them out if they don’t desist.

She said she has never met the Ooni but only took photos with him at a wedding in Lagos in July this year.

Continue Reading
You may also like...
Related Topics:emmanuella, ooni, ropo