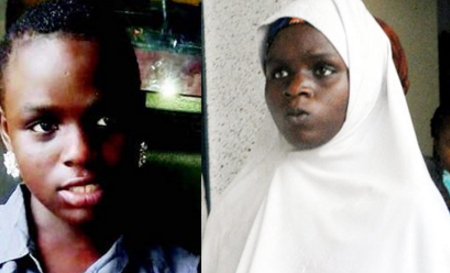 March 3rd, 2016 – Ese Oruru Grants 1st Interview, Narrates How She Was Forced To Convert To Islam

She was taken to Abuja on Tuesday and reunited with her mother yesterday.

Ese who is currently back in Bayelsa state with her parents just granted her first interview with Daily Sun.

See excerpts from the interview below:

How did you meet Yunusa?
We sell food in Bayelsa; so they, Yellow and his other people, used to come and buy food from us.

What does Yinusa do in Bayelsa?
He came to Bayelsa to look for money.

People say Inuwa is your boyfriend. Is this true?
No, he is not my boyfriend. Like I told you, we sell food in Bayelsa, and so, he used to come and buy food from us. He is not the only one; they are many and I used to play with all of them like my own brothers because they buy food from us. I sell food to them just like that.

Can you remember the day he took you from Bayelsa to Kano? How did it happen?
I don’t know.

Did he tell you that you were traveling to Kano?
No. We didn’t go with his Keke (tricycle). His keke, is at home.

Did he come to the house to carry you?
No.

People believe that you decided to run away with him because you love him and want to marry him at all cost.
I know that we used to play with all of them, our customers that come to buy food from our shop.
There is nobody that is different. I sell food to all of them and I laugh with all of them.

So, how did you know you were in Kano since you didn’t know how you got there?
I saw that the place was different and the people there are people that I didn’t know. So, I knew it was his place because I did not know anybody there, but only him. We went to their house first.

So, what did you do?
I did not do anything.

What did you tell him?
I did not tell him anything.

So, you just started staying with him like that?
We travelled to Kura the next day with one man like that. He is the chief of the town. When we got there, they took me to one place and there they gave me hijab; they put it on me. And after that, they took me to one house in Kura. And from there on Monday, in the morning, we went back to the Emir’s Palace in Kano; then in the afternoon, we travelled back to Kura, to stay in the house.

Was it at the Emir’s Palace that you first saw your mother?
Yes. I saw her, but I was not able to talk to her. I was just looking at her and she was crying. I just looked at her. I did not know her and I did not talk to her.

Did you recognize her as your mother?
I don’t know. I looked at her and she was crying.

But when you saw her on Tuesday at the Police Force Headquarters in Abuja, did you recognize her as your mother?
Yes.

While you were away in Kano, they said you got married. Is this true?
No.

Was there any marriage ceremony?
No, I did not get married to anybody.

But did they convert you to a Muslim?
Yes.

So, that was how you got converted?
Yes.

There is also this rumour that it was one old man that actually married you and not Inuwa. Is this true?
I did not get married to anybody.

While you were there in Kano, did you ever fall sick?
I don’t know.

Did they give you any medicine?
Medicine? I don’t know. But if they put it in water or food… They used to give me something, but I don’t know if it is water they used to prepare it. But if I am not well, they would buy medicine for me and I would take. But it was not those types of native medicine. It was from the pharmacy.

Are you happy reuniting with your family?
Yes, I am happy to go back to my family.

How do you feel now?
I don’t know how I feel, but I just look calm. I don’t know what to do.

Do you regret what has happened to you?
Yes.

How?
I don’t know, but I have caused my mother a lot of trouble and put her into problem.

If you see Yinusa now, what would you tell him?
I tell you I’m confused. I don’t know what to do (then she started crying).

What were you doing when you were in Kano?
Nothing.

You mean you just stayed in the house from morning till night?
Yes. I did not do anything.

Were you speaking Hausa before you left for Kano?
No.

So, how did you come about it? Did they teach you?
No. It is because the people there speak only Hausa. They don’t understand English. And when they spoke, I didn’t understand; so I tried and struggled so I could understand what they were saying and communicate with them. That was how I learnt the language.

They call you Aisha. Didn’t you tell them that’s not your name?
I answered it like that.

How would you relate with your other siblings when you get back home?
I don’t even know. I have a feeling that they would do something to me for this thing that has happened.

Like what?
Ese: I don’t know if my mother will beat me when we get home for what has happened because she may think that I know everything that happened to me.

I don’t think she would do that, considering all the efforts she put to get you back home.
(Then the mother assured her that she would do no such thing, saying she was filled with gladness for seeing her alive).

How old are you? There has been a controversy about your age.
Ese: I am 14 years old.

What is your favourite subject in school?
Ese: Mathematics.

And what do you hope to become in future?
Ese: I hope to go back to school and become a nurse in the future.

Your brother said you are a good Christian and member of the Scripture Union in your school and that you used to preach to people. Is this true?
Ese: (Smiles) Yes.

Tell me about it.
Ese: Yes, I am in the SU, but they took it to the senior students and the senior students started misbehaving.
So, we in the junior class took our own to a different level to sanitise the whole thing. We hold our fellowship in our class and go out for evangelism.

What is your advice to young girls like you out there, considering what you have gone through?
Ese: They should be careful.

How?
Ese: They should be careful with the people they play with or talk with, because it’s not everybody that is good.

What is your appeal to your parents since you are afraid they are going to beat you?
Ese: I don’t know what to do. I am confused. I don’t know what really happened to me and I don’t even know where I am. But I know that she is my mother.

What did you miss most while in Kano?
Ese: I missed my mother’s cooking. She used to cook sweet food for me; so I missed good food.

Does it mean you were not eating good food?
Ese: Yes, I was only eating rice and bread.

What would you want your mother to cook for you when you get home?
Ese: Banga soup and starch.

From her responses in this interview, it seems she is no more in her right mind.

25 thoughts on “Ese Oruru Grants 1st Interview, Narrates How She Was Forced To Convert To Islam”