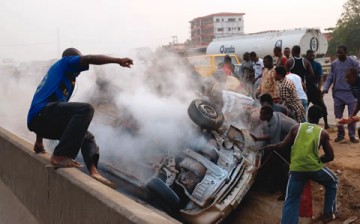 Another accident occurred around 3.35 a.m. on Thursday at Alapere in Ketu Lagos.

The accident involving a commercial Volkswagen bus which somersaulted severally claimed the life of a woman identified as Iya Ewe and injured 17 others.

The body of the deceased woman has been taken to Mainland General Hospital while the 17 injured victims were taken to the Trauma Centre at Toll gate.’