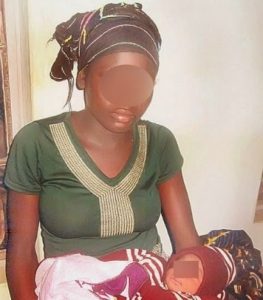 An Ekiti State High Court in Ado-Ekiti has sentenced a man, Lucky Ayosin, to life imprisonment for serially defiling his daughter.

The girl later bore him a baby girl.

Ayosin was also sentenced to 10 years’ imprisonment for attempting to kill the victim’s elder brother, Ilesanmi, who caught him while having sex with his younger sister.

Justice John Adeyeye held that the prosecution had proved the case beyond reasonable doubt by the evidence made available to the court.

He ruled that both sentences would run concurrently.

During the case, the victim, a Senior Secondary School (SSS) 2 pupil, carried the pregnancy of her father and later gave birth to a baby girl.

The convict’s 20-year-old son, Ilesanmi, caught his father having sex with his 16-year-old daughter three times.

Ilesanmi was shot by the father with a single-barrel gun in a bid to cover up his crime, but the boy escaped and reported the incident to his mother, Yemisi Bayode, who divorced the accused 14 years ago, leaving the two children in his custody.

According to the charge sheet, the incident occurred on or about November 19, 2015 at Isaba-Ekiti in Ikole Local Government.

The convict was first arraigned at a magistrates’ court before issuance of legal advice by the Director of Public Prosecutions for the case to be transferred to the state High Court.

Ayosin was first arraigned at the High Court on February 21, 2017 on a two-count charge of attempted murder and rape.

The prosecution called five witnesses to prove the case, including a doctor, who examined the girl defiled and impregnated by her father.

Exhibits tendered included the statement of the convict, medical report and the single-barrel gun with which he shot his son who caught him while forcibly having carnal knowledge of his younger sister.

A counsel from the Office of the DPP, Mrs. Kemi Ajumobi, represented the state, while the convict was represented by Mrs. A.T. Baderinwa from the Legal Aid Council.

The judge in finding Ayosin guilty said his conviction would act as a deterrent to others.