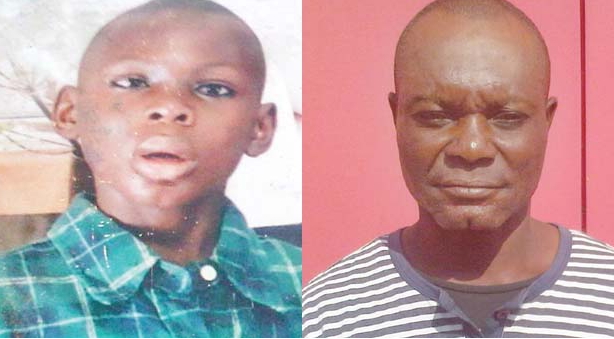 Is 15-year-old Ebu­ka Azudiugwu dead or alive? That is the yet unanswered Big Question that has left his father, Mr. John Lawrence Azudiugwu and other members of the family traumatized and heart­broken for the past two months that the dumb teenage boy has not re­turned home.

Was he abducted, probably by ritualists or involved in an accident and now lying stone cold in the mortuary?

Expected­ly, the mysterious disappearance of the teenager has made the atmosphere in his parent’s home cold.

With manic effort, Azudiug­wu narrated to Daily Sun, how he came home on the night of October 5, 2015, and learnt to his horror that his son was missing from the house. He met other members of the family searching for Ebuka.

“As I returned from work that Monday, I was told they were looking for my son. At first, I actually believed that he was going to return that same day, though it was already night when I got home. I couldn’t sleep well that night, especial­ly when it was deep into the night. As at that time, many evil thoughts began to run through my mind,” he said.

He stated that he became very worried and afraid that some­thing bad might have happened to Ebuka, but he was not sure of what exactly could have be­fallen him. The night appeared longer than normal for Azudi­ugwu’s family as they earnestly waited and hoped for Ebuka’s return. Before the cock crew, he jumped to his feet and head­ed to the police station to report the unpleasant development.

Hear him: “The following morning, I went to Pako Police Station to lodge a complaint. The policemen collected all the necessary information from me and assured me that they would do everything possible to trace my son. I later went to Ijora and Orile Police Stations to also inform them of my ordeal.

“Later on, while we were ask­ing people around if they came across Ebuka, some people said they saw him the following day in a certain area, but they were not aware that he was missing from home. I would not know how true that was. But I don’t want to believe that he is dead. Why will anyone kill him?”

Azudiugwu who hails from Isieke village in Okija town, Ihiala Local Government Area of Anambra State described Ebuka as a quiet and easy-going boy loved by everyone in the neighbourhood, and who is fair in complexion. He said that the teenager had an ailment when he was a toddler, and further revealed that the health incident caused him speech impairment. Following what seemed like recovery from the unfortunate illness, Ebuka was no longer able to speak, but he retained full hearing ability.

Until his disappearance, the teenager lived with his par­ents and four siblings at 13, Olumoku Street, Amukoko area of Ajegunle, Lagos State.

Azudiugwu and members of his family have been discon­solate since the teenager was declared missing, and every passing day, with the boy not having been found, the family’s psychological pain deepens. Where is Ebuka, what has happened to him? Who has seen him? Who can help locate him? The questions just pour out, unanswered. Yet the family, expectedly, has refused to let hope of seeing their beloved son again dim. As he spoke with Sunday Sun, tears welled up in the reddened eyes of Azudiug­wu, who strives to care for his family with income earned as a commercial motorcyclist.

Interestingly, Ebuka shares birthday with Nigeria, having been born on October 1, 2000. Five days after turning 14, the unthinkable happened: he went missing on Octber 5, throwing the family into the embrace of sorrow till date as they have neither heard from nor seen him.

Initially, his siblings thought their eldest brother went out to visit some friends in the neighbourhood. But when the day drew close to night, they began to feel uncomfortable and swiftly ran around the neigh­bourhood in search of their beloved brother. They looked everywhere and in all the likely places Ebuka could have gone but their efforts were in vain.

Azudiugwu told Sunday Sun that immediately he returned from work in the night and was informed that his son was missing, he raised his hands into the air, as if asking God to come down from His throne and do wonders and safely deliver the boy back home. Or alterna­tively strike those holding his son captive with lightning and thunder.

He said he had asked God on countless times who could have caused him and his family such pain, and wondered why anyone should harm the innocent boy.

However, Azudiugwu is also perturbed by the fact that since Ebuka could not speak, evil-minded persons might have capitalized on that to abduct him since, he could not scream, and then quietly lead the inno­cent boy away.

The distressed father said he had taken his son’s name and picture to his local church for prayers in the earnest hope and belief for divine intervention in the situation of his son. He called on the police, hospitals and members of the public to help him locate his son.

Azudiugwu lamented that Ebuka’s siblings had equally been going through a harrowing experience since their brother went missing.

Ebuka’s mother, Victoria, has been weeping and praying everyday for her son to return home unharmed. The hapless mother of the missing teenager had gone out on the fateful day to hawk cooked food at a con­struction site, which she does to earn a pittance to support her husband in caring for the fam­ily. When she came home that Monday evening, October 5, after the day’s sales, which now seems like a Black Monday, to hear the heart-rending story that her first born was missing, Vic­toria, like Rachel in the Bible, she raised her voice in lamenta­tion and profusely wept.

Mr. Christian Okoligwe, who is a family friend to the Azudiugwu’s, told Daily Sun, how his heart cut after Ebuka’s father narrated his ordeal to him. He said he was moved by the pathetic story and had since taken the poor and dejected father to different places, including media houses, where he could seek help that may lead to unraveling the mystery surrounding Ebuka’s whereabouts.

Continue Reading
You may also like...
Related Topics:boy, disabled, lagos