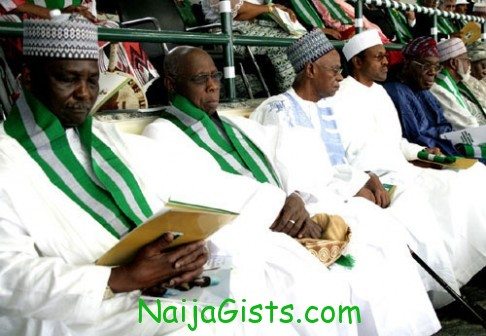 According to a report from Punch, the Federal Government is set to spend a whopping N3.1 Billion on Obasanjo and others. naijagists.com

Read the detail report below:

“The Federal Government plans to spend N3.19bn on the pensions and allowances of former Presidents, Heads of State, their deputies, former leaders of the National Assembly and their families in the year 2012.

The proposed N3.19bn represents an increase of about N2bn from what was provided for the former rulers in the 2011 Budget.

The government also earmarked a total of N141.7bn for the pensions and gratuities, of retired civil servants, that are not captured in the contributory pension scheme.

The amount contained in the 2012 budget currently before the National Assembly is under Service Wide Votes. Our correspondents report that beneficiaries under this heading will receive a total of N414.4bn for the fiscal year.

Other beneficiaries are the widow of a late former President, Dr. Nnamdi Azikiwe; the widows of a former Prime Minister, the late Sir Abubakar Tafawa Balewa; and the widows and families of former Heads of State, General Murtala Muhammed; and Gen. Sani Abacha.

When the N1.2bn bill was presented to the Senate in 2011, the Senate Committee on Federal Character and Intergovernmental Affairs queried the amount, saying that it was too high a price to pay for the comfort of former leaders who presided over the “economic retardation” of the country.

Among other benefits, the former leaders are expected to get a five bedroom housing accommodation each in any location of their choice with telephone services; at least three vehicles; and salaries of personal staff.

Also, the law provides that government should cater for the needs of the former heads of state whenever they visit Abuja, as well as pay for their use of courier services.”