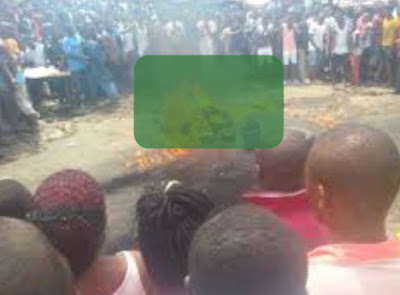 December 18, 2017 – Female Kidnapper Caught While Attempting To Kidnap Twins From Arabic School In Ilorin Burnt To Death By Angry Mob

A woman was killed in Ilorin, the capital city of Kwara state today after she was caught while attempting to kidnap two children from an Arabic school in Kilanko area of the city.

The suspect whose identity is unknown reportedly went to the the Arabic school and told the school authority that the mother of the twins sent her.

The school later contacted the mother of the children who denied sending her to fetch her kids.

The mother of the twin boys who lives close by immediately stormed the school to confront the woman.

In the process, passersby who had gathered to watch what was happening seized the suspected kidnapper, beat her to death and burnt her corpse in the middle of a busy road at Offa Garage area of Ilorin.

Kwara Police spokesman, Ajayi Okasanmi who confirmed the incident this afternoon said those behind the barbaric murder of the suspected kidnapper will soon be caught.