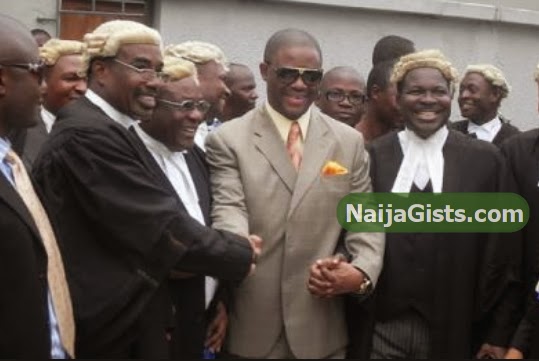 The money laundering case against former aviation minister, Chief Femi Fani Kayode has been put on hold again due to the absence of lead counsel from EFCC.

The absence of prosecution counsel on Thursday stalled the trial of FFK over alleged N230 million money laundering charge.

FFK is currently on trial on a 47-count charge before a Federal High Court in Lagos.

The trial could not continue as scheduled because the lead counsel to the Economic and Financial Crimes Commission (EFCC), Mr Festus Keyamo, assigned a team of lawyers from his chambers to represent him.

The team of lawyers was led by Mr Vitalis Ahaotu.

Counsel to the accused, Mr Ifedayo Adedipe (SAN), therefore, challenged the legality of Keyamo’s chambers to appear in court.

Adedipe said that Keyamo had no legal authority to delegate his law firm to practice on his behalf.

He cited Section 24 of the Legal Practioners Act, a 2007 Supreme Court decision in the case of Okafor vs Nweke to back his argument.

“I object to the appearance of the chambers of Festus Keyamo by his team of lawyers to prosecute this case.

“Keyamo is not authorised under the Legal Practitioner’s Act to assign his chambers to practise,” Adedipe said.

However, the Prosecution Counsel, Ahaotu, urged the court to disregard the submission of the counsel to the accused, arguing that the counsel should have filed such submission so that they could give their reply.

Justice Rita Ofilli-Ajumogobia, consequently, adjourned the case till Nov. 27 for further mention and told the accused counsel to file his application within two days.

The News Agency of Nigeria (NAN) reports that the EFCC had on Feb. 11, re-arraigned Fani-Kayode over alleged money laundering and financial impropriety to the tune of N230 million.

The former minister’s re-arraignment was consequent upon the re-assignment of the case to another judge, following the transfer of the former judge handling the matter.

Fani-Kayode was previously, arraigned on Dec. 23, 2008, he pleaded not guilty and was granted bail in the sum of N200 million, with two sureties in like sum.

The EFCC stated that Fani-Kayode committed the offences when he was the Minister of Aviation and that of Culture and Tourism.

The commission said that the offences contravened the provisions of the Money Laundering (Prohibition) Act, 2004