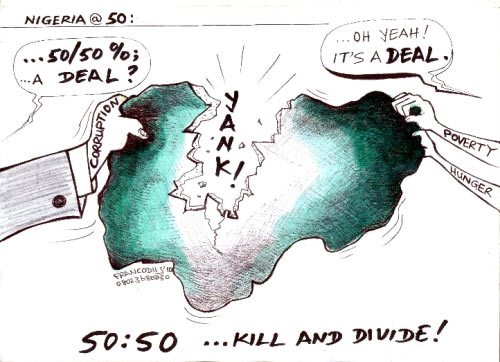 Do you guys remember the 2015 Prediction on Nigeria ? Read it here

Below is another insightful article on this subject matter.

Our great country of Nigeria is leaving under what is known as “Force Marriage”.

Since Nigeria is made up of multi-ethnic groups with difference in culture, religion, language, etc, there can never be peace; North (Muslims) and South (Christians) will be leaving under pretence of “one nation”. naijagists.com

The Nigeria civil war between Nigeria Vs. Biafra; introduction of Sharia in Nigeria; Arabic symbol on Nigerian Currency; Islamic Banking; coupled with the three (3) days automaton by the Islam (through their sponsored Sect Group; Boko Haram) on Christians to evacuate Northern part of Nigeria is a clear indication that Northerners (Muslim) & Southerners (Christians) cannot leave together and as such should separate peacefully.

The bombing, burning and shooting of Christians even at their places of worship, most recently and sympathetic is the one of 25th December, 2011 (St. Theresa’s Catholic, Madalla, Niger State).(Read Christmas Day Bombing News)

Christian massacre from 2001 to 2011; Killed = 2,410, Injured = 3,182 (record extracted from https://www.thereligionofpeace.com/Pages/ChristianAttacks.htm), and this is another indication that Nigeria might go into religious war or military will take over power to calm the situation, if not separate peacefully.

They use Almajiris (Islam Abandoned kids/youths; usually beggars) from Nigeria and nearby countries, such as; Chad & Niger to perpetrate this ugly act (mostly suicide bombing) in the name of Jihad.

To further prove this statement,

Nigeria situation cannot be addressed because most Nigerian leaders are naturally corrupt and Boko Haram has infiltrated all branches of government and security services.

Majority of Nigerian leaders are only concerned about themselves, their family, their friends and their ethnic group.

Mass Youth Unemployment, Removal of Fuel Subsidy without indigenous Refineries (The money to be realised from fuel subsidy removal might be squandered by our leaders as usual), Insecurity on lives/properties, Corruption in all agencies/ministries, crash of Naira/kobo, Poor Education & Health System standard, etc.

Development and benefits of democracy in Nigeria is centred only at Abuja.

It is clear to all that money vested on security in Northern part of Nigeria would have been used on the development of other parts of Nigeria.

Security Budget for 2012 is set to consume nearly a fifth of the total federal budget.

The activities of Boko Haram in Nigerian has turned this country into a terrorist country thereby scaring away some potential foreign investors thereby taking this country backwards in terms of development.

Our present leaders/their friends/their relations always kick against splitting Nigeria, because they are the only ones benefitting from the present devastating condition of Nigeria. They grow richer, while the masses go poorer.

Final Solution To The Present Crisis In Nigeria

Finally, Christians and Southerners here and in diaspora are encouraged to fight towards breaking out from the North.

Let us use our God gifted resources to create a country where there will be peace, unity and development.