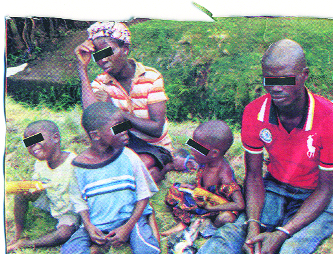 It was double tragedy in a Warri community in Delta State as the mother of five school children who were allegedly sold to a suspected ritualist, slumped and died.

It was gathered that the pupils whose ages range between two and eight were sold for N5 million by a tricycle operator, who conveyed them to school.

Investigation revealed that the tricyclist allegedly sold the children for N1million each to a ritualist.

The inhabitants of the sleepy town of Otokutu, where the incident occurred were said to have been shocked when the sad news spread across the community.

Sources told Daily Sun that the deal was blown open when a female friend to the mother of the children called to tell her that her children were not in school.

Shocked by the news, the woman ran to the school but did not see her children. She immediately rushed to the residence of the tricycle operator, who the family had trusted so much and met the man moving his belongings apparently in a bid to escape.

The man was immediately arrested by youths of the town, who subsequently handed him over to the police.

At the police station, the suspect allegedly admitted abducting the five children and selling them to a suspected ritualist from the northern part of the country. Unfortunately, efforts to track down the buyer failed as he was said to have escaped with the children.

Overwhelmed by the pain of losing her children, the woman was said to have slumped and died instantly. Her husband was also said to have collapsed and has been receiving treatment at an undisclosed hospital.