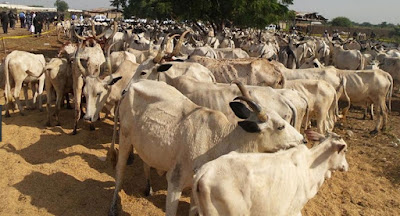 Pandemonium engulfed Igangan town under Ibarapa North Local Government in Oke-Ogun Area of Oyo State as Fulani herdmen attacked their hosts whom they accused of poisoning their cows.

According to information from the area, no fewer than 10 people are lying critically injured in an undisclosed hospital after being attacked with machetes and other dangerous weapons.

The herdsmen were said to have accused their hosts of killing 15 cows in the last two weeks by putting poisonous tubers of cassava and other items on their grazing tracks.

The situation would have escalated but for the timely intervention of the National President of Jamu Nati Fulbe Association of Nigeria, Alhaji Saliu Kadir who is also the Sarkin Fulani of Igangan.

Alhaji Kadir who spoke with some newsmen after a meeting with the Police, Army, Nigerian Security and Civil Defence Corps, NSCDC, and the Department of State Security Services, SSS, said, “15 cows have been killed by the farmers. They poisoned some crops which they put on the tracks that the cattle usually take. My people actually wanted to avenge the death of their cattle, but I calmed them down by telling them that Governor Abiola Ajimobi, the Commissioner of Police and other security agencies in the state should be allowed to address the issue. I believe they will attend to the issue without delay”.

He recalled that there was an existing agreement between the Fulani herdsmen and the farmers on the modalities for payment of compensation in the case of any straying cattle encroaching into farmlands but lamented that the agreement was now being abused by the farmers.

“There are times that the farmers would make us pay heavy compensation that is not commensurate with the crops destroyed by the cattle. Yet, we pay the compensation without complaining”, he added.

However, Baale Agbe Tapa, Chief Oludele Oyedepo has appealed for peace in the area saying, “When they made Alhaji Kadir the Sarkin Fulani of Igangan, many of us were surprised wondering who knew him. But since he assumed the position, he has been doing very well. Were it not for him, the situation on ground would have worsened. We should bear something in mind that there are so many bad people but good people are very difficult to come by.

“We had a meeting at Ayete last week, we discussed this issue and we are here again. We have met the CP at Eleyele over this matter. We agreed at one of our meetings that a farmer has the right to apply any chemical on his crops but what is the justification for putting poisoned food on the footpath for cattle? Sarkin called me one day and said someone should take me to a grazing track.

“I used my hand to pick many tubers of poisoned cassava on the path. At another time when we had a meeting at CP’s office, there were about 11 bags of such items brought to CP’s office as proofs. It is better we live in peace with one another”.